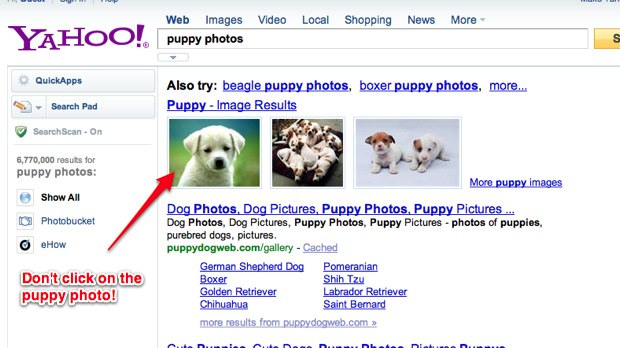 It’s been a really bad day at Yahoo. Today, the company handed out over 500 pink slips to employees, laying off 4% of its workforce less than two weeks before Christmas. And now there’s something seriously off with its image search: do a query for just about anything using Yahoo’s web search, click an image result, and there’s a good chance you’ll be looking at some very graphic pornography.

The photo that appears is a closeup shot of a man and a woman fornicating. I’d post a blurred out photo, but the result would just be a giant blur. Suffice to say, there’s no question that this is XXX-rated. To be clear, this only happens if you run a search using Yahoo’s main ‘Web’ search engine and then click on one of the integrated image results — if you use the dedicated image search feature, it won’t work.

And it’s not like this is a freak occurrence — I’ve had the same photo show up for queries for “puppy photos” “car photos” and “TechCrunch photos”.

This could be the work of a disgruntled former employee, or it could be the result of a bizarre glitch (less likely). We’re reaching out to Yahoo to find out more.

Update: This issue has been going on for at least 30 minutes now, which is far longer than I expected it to last. And it’s a big deal — it’s affecting a lot of people. According to the counter on the image, as of 5:56 PM PST it has been viewed 192,082 times (though I don’t know how high that count was before this evening).

Update 2: Alright, as of 6:10 PM PST it looks like Yahoo has fixed this by removing all images typically displayed as part of its web search.

Update 3: Here’s Yahoo’s statement. Note that it implies that this was an issue on Microsoft’s end, and not a disgruntled former employee.

Yahoo! experienced issues with some of our image search results for a short period yesterday. We worked with Microsoft to correct the issue quickly and apologize to users who were affected.

Thanks to the folks at Zurb for the tip.