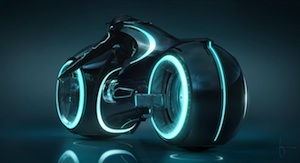 While Apple has spent much of the latter part of this year ramping up their iAd platform for iOS devices, they have not yet focused on one key area: the iPad. That will change in early 2011, when the company will begin a full-on advertising assault within apps made for the popular tablet device. And today they’re offering a glimpse of that future. And they’re wisely doing it with Tron.

Apple and Disney have teamed up to show off what iAds for the iPad will look like with a Tron Legacy unit that begin to appear today in some iPad apps, we’re told. “Disney and Apple are excited to debut the ‘Tron Legacy’ iAd today as a special preview of iAd for iPad, which launches next year. iAd brings ‘Tron’s’ pulsing energy and vivid graphic style to iPad’s stunning display, creating a truly immersive ad experience,” the joint statement between the two companies reads.

Much like iAds for the iPhone, iAds for the iPad will be heavily based around a rich media experience that makes it seem almost as if you’re in an app within an app. You click on the Tron Legacy banner ad and you’re taken into an ad that takes up the entire large screen of the iPad and shows you options to view Tron videos, see photo galleries, look at character bios, and get music previews (from the popular Daft Punk-scored soundtrack).

Of course, like iAds for the iPhone, the real key will be getting attractive advertisers to sign up for the platform as well. While Apple had some big names to share when they unveiled iAds, since they launched, the reviews from developers and advertisers have been mixed. Developers seem to complain about not enough inventory, while advertisers complain that Apple is too strict on how they should make their ads.

Disney is an obvious test case for Apple as the two have had tight partnerships in recent years. Undoubtedly, this is helped by the fact that Apple CEO Steve Jobs is Disney’s largest shareholder and sits on their Board of Directors.

As mobile advertising begins to ramp up, advertising on devices like the iPad will be interesting to watch. Will advertisers choose to create new kinds of ads specifically for tablets? Apple’s bet is clearly “yes”. And it’s hard to blame Apple for getting Tron fever, we have it too!

AdAge has a couple glimpses at what the Tron iAds look like.

Update: And we snagged a high resolution glimpse of the ad as well. 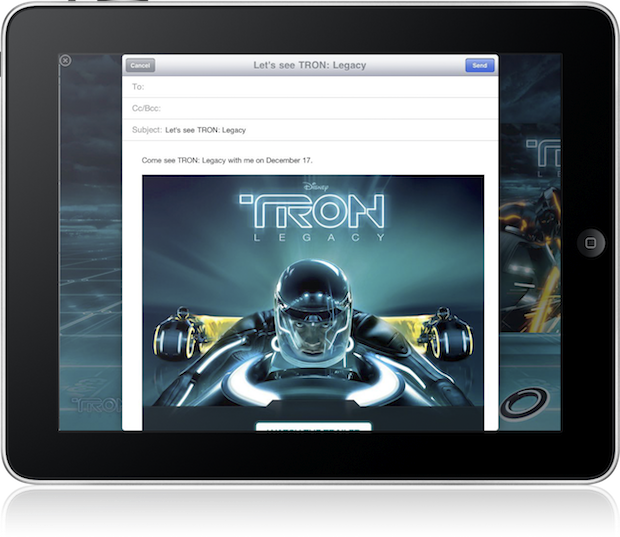