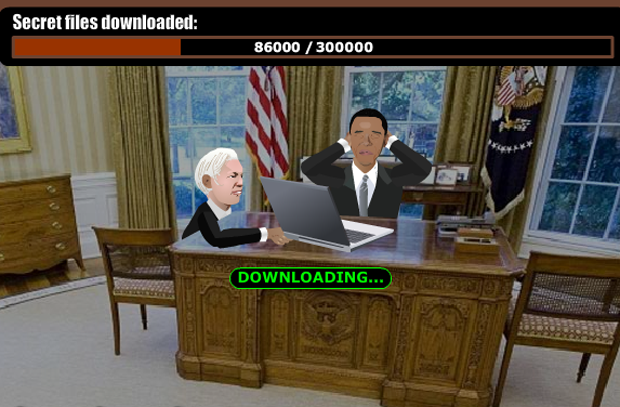 Between the drama, intrigue and Interpol, the WikiLeaks saga has all the trimmings of a Hollywood movie. One friend of mine is debating quitting her job in order to write a movie script (She sees Lupin from Harry Potter as playing Assange). And she better hurry up — I’m betting at least two WikiLeaks-related scripts are getting pushed through Hollywood as I write this.

Perpetually outpacing the movie industry, the story has already hit home with the gaming community. Indie game developers have created the WikiLeaks Stories collective in order to turn some of the actual stories revealed in the WikiLeaks cables into games. Dutch developer Sebastiaan Moeys has directly tapped into the zeitgeist and spent a week creating “WikiLeaks: The Game” where, in a bit of creative fiction, you can play Assange stealing private documents himself. At least one other WikiLeaks inspired game (“Uncle Sam Vs. WikiLeaks” also exists).

In Moeys’ “WikiLeaks: The Game,” your objective is to wait until President Obama is asleep and then try to download 300K secret files from his laptop with a USB. Just like governmental attempts to quash WikiLeaks, the game is harder than it looks, I’ve played it five times and I still haven’t won.

You can try your luck here.