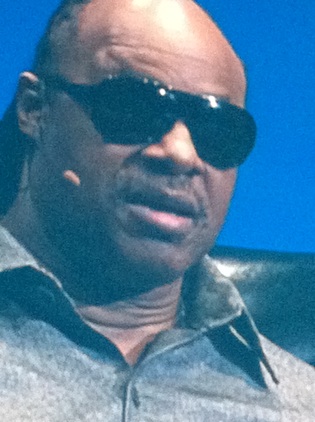 Sometimes it gets so hard to begin a post. This is not one of those times. Marc Benioff tells the story of how Bill Clinton was delayed coming out here for his session at Dreamforce 2010, was going to be an hour late, 15,000 people ready for POTUS 42, now what? Then Marc noticed Stevie Wonder walking down the hall toward him, taking Benioff up on his invitation to see Clinton speak and then stick around for the night’s concert with Neil Young.

So Marc called an audible and brought Stevie onstage for an extraordinary conversation interrupted only when Clinton reached the auditorium. I had forgotten how incredibly intelligent and equally verbose Bill could be, but his gentle embrace of Stevie Wonder spoke across the generations and cultures. And later that night we sat in awe as Neil Young sang to the ages, every strum having a reason to be there. The message of serendipity, hope, living a life of service mixed with compassion, all those things we yearn for privately but laugh off in the public moment, on display and alive 30 years to the day John Lennon was killed.

The day Lennon died I sat in the pool room at the Band’s Shangri-La studio in Malibu, watching Monday Night football. Howard Cosell brought the news in that time’s version of Twitter, instantaneously changing our assumptions. If this could happen, anything was possible. But in the worst of ways. No longer was this about a group breaking up — a producer in the room sloughed it off with “he’s just a guitar player” as tears came and the numbness set in. I left the room and walked down the beach to a friend’s house and never went back.

It was a long time before we could summon the courage to believe in life’s possibilities after that. I say we because I know it to be true, that thing summoned in the Sixties against a stacked deck that time and time again proved more powerful than we actually believed. Strangely, Nixon and his henchmen proved more understanding of Lennon’s power, just as today we understand more of Nixon’s power to bring change in monetary policy, opening China, setting a standard of political analysis unequalled even in today’s loud, confident cable posturing. We were blinded by our passions, but not our intuition.

Slowly we recovered yet again from the wounds of war, the defeat of respect, the emptiness of lost trust. We drank our fill of the 80’s, stumbling out of Save the Robots at 7AM reaching for sunglasses as we swam upstream against people on their way to work. We escaped the City, raised our children, watched Jobs and Gates and the others bootstrap the space program to reinvent our tools and toys, and did what we could to learn to believe in something, anything. It wasn’t the same, but just as we become our parents, we learned to reinvest in our souls.

Recently something began to change, probably not a big deal on the surface but palpable nonetheless. The iPhone had some of it, but the iPad confirmed it. Here was this thing that we were told was not useful, that was good for status updates but not real work, that didn’t run Flash because of a personal vendetta rather than the fact that it held our souls back. Don’t believe, don’t smile, don’t revel in the freedom to put any combination of words or bits or ideas in whatever order we dream. And forget what we’ve learned: that no matter how painful the moment might be, it’s in that moment that the beauty and the hope of life is reborn.

Lennon was a guitar player, probably the greatest rhythm guitar player of his time. Listen to the feel of A Hard Day’s Night, throbbing with that extra thing that we don’t understand but immediately believe in. And hear it today in PokerFace, as Lady Gaga drives the magic bus on our Xbox Kinect. Like Stevie Wonder walking down the hall, my wife asked a Target salesperson if she had any of the 250 gigabyte ones, the ones you can’t get anywhere, not even with fading pull at the Microsoft store. She says yes, there’s one in back, came in last night. And sure enough, like Stevie walking down the hall, she was right.

What is this Kinect thing anyway? It scans your face, the silence in the room, the level of the music you play back with, the rhythm of your dancing, all the while feeding back reinforcement as you learn the moves and find yourself inside the track looking out. When Neil Young played those opening power chords — tin soldiers and Nixon bombing, we’re finally on our own, this summer I hear the drumming, four dead in Ohio. This is not a game we’re playing, this is a living and breathing thing, something new that has all of us children with a shining light in our eyes.

You can return to your cynicism and trending terms if you must. We understand that it’s part of the process of relearning a reason to believe. As Steve Wonder said in that timeless conversation with Marc, the one that only happened because Bill was on the longest flight from east to west of his life, the one where he spoke of his mother coming to him in a dream after she passed away, the one where he talks of how thankful he is for the blessing of being blind. “It’s allowed me to have a very objective point of view — this whole color thing.”

Sometimes it’s just as hard to end a post. But not this time. Microsoft has something really big here with Kinect, a machine we can learn to love. Spend a night on the couch watching your kids play inside the music, rafting and jumping, or sit in a sea of iPads in a Dreamforce keynote and surf the chatterstream in the hall and over the Net. When Neil Young thanked the benefit audience for contributing 3 million dollars to the UCSF Benioff Children’s Hospital, he was acknowledging the collaborative nature of his artistry and our willingness to believe once again. Of course, we already know he has a heart of gold.