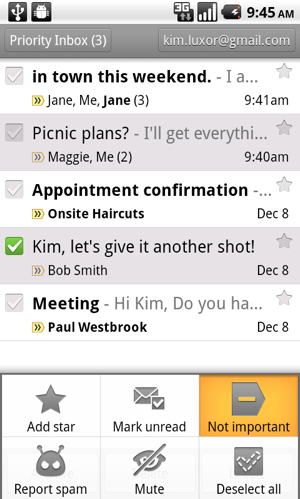 Back in August, Google launched Priority Inbox, a feature that automatically flags messages that Gmail believes you’ll be most interested in. It’s a great feature — Google says it cuts down the amount of time users spend reading email by 15% — but until now it hasn’t really been available on Android, which features an otherwise great Gmail app. Today, that changes, as Google brings Priority Inbox to Android.

If you’ve used Priority Inbox on the web, this will be pretty familiar. Messages in your inbox that Gmail thinks are important are tagged with arrows in the normal ‘inbox’ view. And if you want to only look at the important messages, you can jump to the ‘Priority Inbox’ label (you can also set this to your default).

Some other new features: you can now tell Gmail to notify you (via a vibration or sound) whenever you receive messages in your Priority Inbox; but spam and less important messages won’t activate the alert. Google has also made it easier to select options like ‘reply all’.

You’ll notice that Gmail for Android is getting more frequent updates now — it was only a few months ago that it got its last update. Prior to that, the app had been tied directly with Android’s operating system, which was a problem because many users don’t get the latest version of the OS for many months after they’re released (if ever).

Of course, even with the decoupling of the app and the OS this update requires Android 2.2, which only 43.4% of Android phones are currently running, so not everyone will be able to use it. But it’s still better than only giving the Gmail upgrade to users on Gingerbread, which is only supported by the Nexus S at this point.