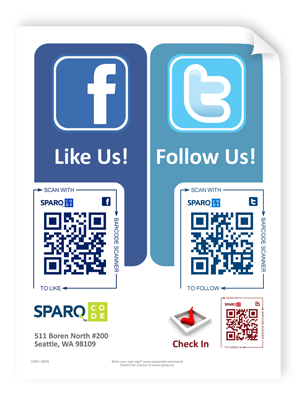 MSKYNET, a company that allows businesses to create and analyze the usage of 2D barcodes called SPARQCodes, launched a service today that helps local businesses connect their customers with their online presences, such as Facebook, Twitter, Gowalla, and Foursquare. MSKYNET raised $550K in seed funding back in August.

SPARQCodes are very similar to normal QR codes, but differ slightly because they link to a URL instead of embedding their payload data in the QR code itself. The new feature, which is called ‘Connect N Share’, is very straightforward — it makes it easy for businesses to generate QR codes that link to the business’s presence on Twitter and/or Facebook. The idea is to direct customers who are waiting in line or for their food to scan a code that they see on the wall, which leads them directly to the business’s Facebook page.

Setting up your QR code printout using the new feature is actually pretty slick. First, you type in the name of your business — the web app will try to automatically find the matching Facebook and Twitter accounts (you can tweak this if it guesses wrong). Enter your address, and it will try to pair it up with your Foursquare, Gowalla, and UrbanSpoon accounts. Add a logo, hit ‘Build it!’, and you’re done. The site will spit out a printout with your QR codes, directing visitors to your business to scan them.

Businesses with more substantial social media presences can direct users to a list of sites that are relevant — a restaurant might also include Yelp in their mini-portal, for example. Founder Jesse Chor says that the company is mainly targeting small businesses and franchises, which tend to value a social media presence, but do not usually have the technical expertise to make their own QR codes.

The codes and the analytics that come with them will be provided free of charge, but businesses will have to pay to include additional social media services that may crop up over time. Chor also stated that MSKYNET will charge for “customer retention programs,” in the future, but did not elaborate on what they might be.

MSKYNET is far from the first company to offer QR code analytics (see here for a good list of other services), and it isn’t the first to target local businesses either — Google has its own business-facing QR code features, too, as do some other QR code companies.