Oracle has dominated the database market, especially following its $7.4 billion acquisition of Sun Microsystems. But today, its “frenemy” Salesforce.com will become more of a competitor with the launch of Database.com, the company’s enterprise database built for the cloud.

Database.com is essentially and plug-and-play storage infrastructure for any developers, using any language, platform or device. Salesforce is leveraging on the same technology that it uses to power its own applications, and is now making this a stand-alone service for developers to create their independent applications. As Salesforce’s primary database in the cloud, the company touts Database.com as one of the largest enterprise databases, containing more than 20 billion records and delivering more than 25 billion transactions per quarter at an average response time of less than 300 milliseconds.

As Salesforce CEO and founder Marc Benioff says: “We see cloud databases as a massive market opportunity that will power the shift to real-time enterprise applications that are natively cloud, mobile and social.”

Built to power cloud-based applications, Database.com will offer an infrastructure for enterprise apps to deliver updates and information in real-time. Developers can write their applications in Java, C#, Ruby, PHP or more and can run their apps anywhere – on Force.com, VMforce, Amazon EC2, Google AppEngine, Microsoft Azure or Heroku.

Apps can also run natively on any device, like an iPad, an iPhone, Android or Blackberry. Salesforce says that these apps can all call the Database.com APIs whether it be for a small application or for an app that supports hundreds of thousands of users.

Features include user management, row-level security, triggers, stored procedures, authentication and APIs, all in an easily scalable cloud infrastructure. The product’s relational data capabilities include tables, relationships, support for a variety of field types, triggers and stored procedures, a query language and enterprise search. All types of filed, including documents, video and images, are supported for storage.

In terms of pricing, Database.com access will be free for 3 users, and up to 100,000 records and 50,000 transactions per month. The platform will $10 per month for each set of 100,000 records beyond that and another $10 per month for each set of 150,000 transactions beyond that benchmark. The enterprise-level services will be an additional $10 per user per month and will include user identity, authentication and row-level security access controls.

Analysts estimate that the database systems marketplace represents a $21.2 billion market so it’s no surprise that Salesforce is looking to take a piece of the pie. And as the cloud becomes a more reliable form of infrastructure, a database in the cloud makes sense for apps. 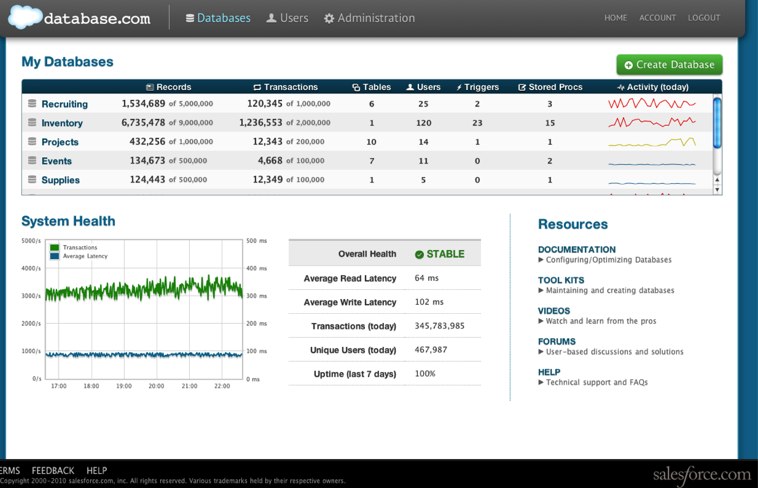 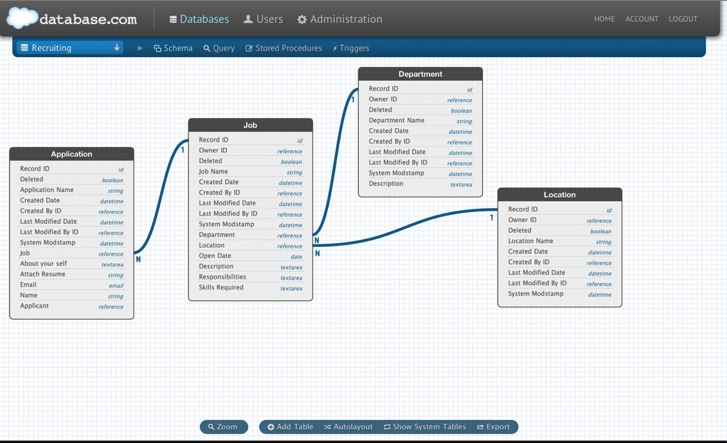