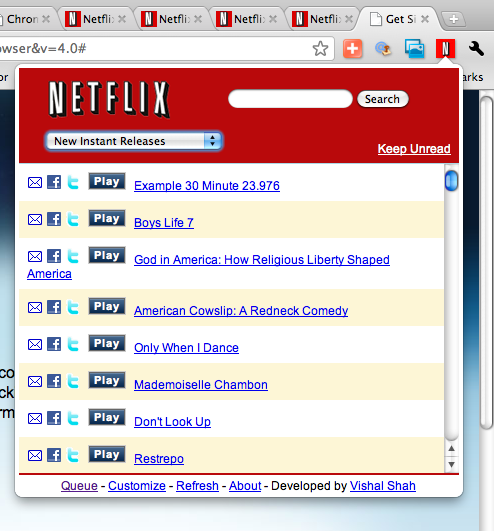 With all this talk of a cloud-based Chrome OS, it’s time to take a cold hard look at what “apps” in this brave new world will look like. I recall a time, not long ago, when Apple was about to change the world with Dashboards and before that Windows users had their own “widget economy.” Then Yahoo! added widgets to the web and then Samsung added widgets to their TVs. And widgets appeared here, there, and everywhere. But do widgets beget money?

No, because they are, by definition, useless as standalone products.

Case in point: I just “downloaded” the Netflix “app” from the Google Chrome App Store and, to my great disappointment, it resulted in an additional widget in my toolbar and little else. When you click on it you see a top 100 list of Netflix movies. Also available is a list of top rentals, new instant and DVD-based movies, and genres. If you click on the Queue button you go to Netflix proper in your browser and if you click “play” another window opens and asks you to update Silverlight. It’s more of a constant ad for Netflix than a real way to interact with the service.

True, there are a few good widgets like Tweetdeck for Chrome (which one wag noted is just like the real Tweetdeck in that it “crashed for no reason”) but a widget is not an app and I worry that the widget economy will overrun the Chrome App store before real apps can take hold.

What is an app and what is a widget? A widget is a way to view information. I compare it to a view or a form in a database – the data is there and the widget can show the data and do very little else with it. An app is a formal system with a process, a way to modify data, and has a clear reason to exist. A widget exists to offer a single piece or set of data quickly.

The problem is that it’s easy to build widgets and it’s hard to build apps. Look at Chumby, for example. The Chumby is a widget machine that runs on a Linux core and includes a touchscreen. However, it does not have one clear purpose and, because of this, users have no idea what to do with it. I would say the vast majority of Chumby users plugged it in and forgot about it. My Chumby, sadly, collects only dust.

But hidden in the periphery is an entire Chumby hacking community attempting to create real tools out of the Chumby’s component parts. This is where devices and OSes really shine – with the people dead set on making something useful.

What needs to happen is this: folks like Netflix need to build XBox and Roku-like apps for Chrome and Chrome OS. This will allow users to browse, select, and watch movies from their browsers. The interfaces already exist so it’s not too hard and widgets like this simply get in the way of real, formal application development. In short, go big or go home, Netflix et al. Until then I’ll just keep using your web “apps” on my “standalone OS” machine. I may even fire up Dashboard once or twice this week, just to see how my old OS Xwidgets are doing.