Editor’s note: This is the first of a three-part guest post by venture capitalist Mark Suster of GRP Partners on “Social Networking: The Past, Present, And Future.” Be sure to also read Part II and Part III.

This series is an adaptaion of a recent talk he gave at the Caltech / MIT Enterprise Forum on “the future of social networking.” You can watch the video here , or you can scroll quickly through the Powerpoint slides embedded at the bottom of the post or here on DocStoc. Follow him on Twitter @msuster. 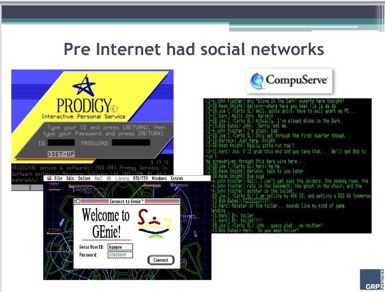 Yes, I was doing it when I was a teenager and yes, it was online, too.  We were on services called CompuServe and Prodigy.  Other people were in the online community called “The Well” (founded in 1985).  We connected for the same reasons you do today.  We were looking for what I call the “6 C’s of Social Networking” – Communications, connectedness, common experiences, content, commerce & cool experiences (fun!).  There were chat rooms, discussion groups, dating, classified ads—you name it.

In in the early 90’s I was in my early 20’s and I programmed on mainframe computers using COBOL, CICS and DB2.  We had email, instant messaging, group calendars, discussion boards, etc. It isn’t new stuff.  It just works better now and there are more people doin’ it.

The Bridge Between Online Services & The Internet: AOL

And then came AOL.  It preceded the WWW.  It was an online community like CompuServe and eventually started offering people dial-up access to the Internet for a monthly fee.  It became the onramp for newbies.  The funny thing about AOL is that while you dialed up to the Internet, the goal of AOL was to keep you locked into their proprietary content and thus earned the classification of “walled garden” because they kept you inside AOL.  They had a proprietary browser, their own search engine, their own content, chat rooms, email system, etc.

But AOL brought online services, email, chat and discussion boards to the masses and thus educated a generation that paved the way for others.  They blanketed the country in CDs stuffed inside of food packages and service as coasters on airplanes.  At it’s peak AOL had about 20 million US subscribers.  That might not sound like a lot in a Facebook world but remember that these people were paying an average of about $20 / month to AOL for access alone (i.e. $5 billion in annual subscription revenues leaving out advertising or eCommerce).

Brands didn’t advertise their web pages they advertised “AOL Keywords.”  You couldn’t pick up a magazine in the 96-99 timeframe without seeing AOL Keywords advertised everywhere.  If you were a newly minted, venture-backed consumer Internet company you had to have a deal with AOL to reach your customers.  They controlled distribution to the masses.

When Time Warner & AOL merged it was widely feared that this would be a monopoly that would control the Internet.  Ha.

As I write these words I’m aware that I could practically change the words AOL and Facebook for much of this section and with a few factual tweaks it might not be noticeable to the reader who I was talking about.  More on that later.

By the mid-nineties we had the World Wide Web, which gave us a standard way to publish web pages using HTML.  Smart people understood that people still wanted to accomplish on the world wide web all of things that we did in the pre-Internet world.  Companies like GeoCities & Tripod built tools that let you publish web pages that could be discoverable by others.

Yahoo! rose to prominence by offering a free, ad-supported alternative to all of the crap your mom got on AOL for $20 / month.  After a few acquisitions they offered many of the services you think about as foundations to social networks today.  They had mail, IM, groups, answers, etc.  Groups in particular became the standard for clubs across the company to communicate to their churches, mothers’ clubs & schools.  Yahoo! then bought GeoCities for $3.6 billion.  They looked unstoppable.  Ha.

Yes, social networks of 2010 have much better usability, have better developed 3rd-party platforms and many more people are connected.  But let’s be honest – they’re mostly the same old shit, reinvented, with more people online and trained.

In my next post tomorrow, I will explore where social networking is today and how we got here.