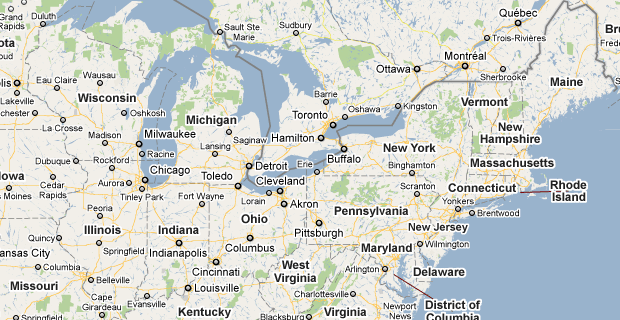 It’s been my experience that Google Maps has always been the most legible of the online map services, though even the worst have come a long way since the early days. I figured it was just the same magical Google power that returned search results so fast and pushed email to my phone in seconds. But while the juice that makes those things go is largely behind the scenes, the optimizations Google has made to the Maps interface are staring you right in the face every time you use it. But you might not have noticed them.

This post at 41Latitude, a blog dedicated to this kind of analysis, is a minute examination of those optimizations, and what competitors might look like if they did the same thing. It sounds dry, but I found it an interesting read, and it’s also one of those things that you can’t un-see.

The primary difference seems to be the way the city labels are placed and weighted. The low-contrast background and various levels of white outline to the type make larger cities pop, and looser rules on where the city label is relative to its dot allow for better spacing between items. And there is apparently a sort of “halo” around larger cities that suppresses labeling of smaller items, the better to highlight the big cities and routes on the map. There are illustrations of these techniques at the post, and I recommend taking a look if you’re at all interested in psychovisual optimization and UI planning.

I don’t mention it just to give Google a pat on the back (though they deserve, and I give it to them — now), but also to bring up the fact that little things like this do add up. Superiority you can see, as Google Maps shows, is important to retaining users. If they know why they like your service, that’s good; if they don’t know, that’s also good. Of course, a different user might prefer Bing’s maps, with their different aesthetic — as long as it’s done with the same attention to detail.

A site like Flickr would quickly be put out of business by a competitor if they didn’t put the photos front and center, in high resolution, with good compression and simple navigation. The best feature set in the world won’t matter if your potential users ricochet off the site instantly because of something that can’t quite put their finger on. Like the idea in Gladwell’s Blink that you can do an extraordinary amount of processing in a fraction of a second, you can do quite a thorough evaluation of a service like Google Maps or Flickr in the same amount of time.

Tiny optimizations create a friendly environment for users, something sites don’t care enough about. Sloppy UI and poor presentation get picked up on by many who don’t even realize they’re doing so. So, a lesson to the competition: the little things don’t take care of themselves, but they might take care of you if you’re not careful.

If you’re interested in the usability of maps thing in particular, 41Latitude is full of posts on the topic.

[via Metafilter, where a commenter points out the interesting Fata Morgana]