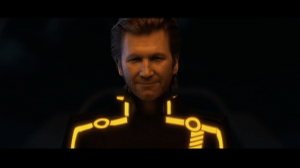 Greetings programs! I have the ultimate TRON interview for you: Jeff Bridges. I had 3 minutes with Bridges, so I asked him this question from TechCrunch fan “itbedave”:

I’m curious as to what Jeff Bridges thinks of blue screen acting then (original TRON) vs. now (TRON Legacy) – and if it’s “advancement” has enhanced or ruined acting in big Hollywood films?

Jeff, who plays Kevin Flynn, loved this question and went into detail about his feelings around motion capture. Unfortunately, I didn’t get to ask him if Flynn abides or if he drinks White Russians, but I think you’ll love his response. He’s not a TechCrunch reader yet, but maybe we can convert him. I’d love to see some Bridges in the comments, wouldn’t you?

Jeff’s interview takes place in the beginning of part 3 and he’s followed by Olivia Wilde who has some awesome advice for women who want to get into technology. I asked Olivia if she was aware of quora.com and she was not, but I’m sure that the folks over at Quora are stoked. Her name in the movie is spelled Quorra, but I imagine there will be a lot of people typing it in with one R. Regardless, it is always nice to have a super sexy, smart and kick-ass woman have a similar name to yours. That’s the kind of brand confusion we can all get down with.

Part 4 includes interviews with the director, co-producer, vehicle designer and the VFX team. TRON: Legacy is the first released feature length film that Joseph Kosinski has directed, which is a huge break from making commercials (Halo & Gears of War). Kosinski is also working on a remake of the 1976 science fiction film Logan’s Run. The original TRON light cycles were designed by Syd Mead who was also responsible for the city backgrounds and vehicle designs in Blade Runner. The light cycles got an upgrade and we got a few minutes with a member of the design team to discuss if light cycles could exist as real motorcycles in the real world. After the interview, Parker Brothers Choppers announced it had made functional replicas and for 55K, you can have your very own. Unfortunately, it looks like they aren’t the best at turning and they lack light trails, but hey, as long as you drive straight where ever you are going, you are good to go!

In case you missed Part 1 and 2 of our TRON Legacy coverage, those interviews with cast and crew can be seen in this post.