Short version: A striking and powerful, but heavy and inconvenient, gaming mouse. Definitely unique, though. When we saw this thing last year, and then again at CES, I was skeptical that it would ever come out. It was just too weird to live. But here we are, almost a year later, and I have it in my hot little hands. How is it? Well, it’s exactly what it looks like. It’s big, heavy, and kind of awesome.

The idea is that it’s a customizable body — something we’ve seen before, I believe in the Cyber Snipa mouse I reviewed a while back. The parts, in this case, are held on with little hex screws, and that little “tail” on the rear of the mouse unscrews to reveal a little hex wrench. Swapping pieces out only takes a minute, and they fit on nice and securely.

You get three palm rests: original, original plus grippy rubber, and elevated, which perches your palm a bit higher up. The right side pinky rest comes in original (no rest), grippy, and enormous flying pinky/ring rest. It’s a little frustrating that there’s nothing in between, as I found the original too little and the big rest too big. That’s just me, though. The palm rest also slides fore and aft, locking into one of several positions. There’s a weight compartment, where you put extra weights. I really don’t think you’ll need them, though. This thing has got to weigh like a pound and a half. If you like heavy mice, look no further. All the metal in this thing makes it feel very substantial, and while the open architecture of it suggests fragility, it is in fact quite solid and well-built.

It’s also an attention-grabber. I had people over at my house after the bars closed, and one and all of them were baffled by how crazy this mouse looked. Some liked it, some hated it, none could effectively use it.

As for buttons: you’ve got your usual left and right mouse buttons, which are extremely sensitive (a good thing, in my opinion), the thumb wheel and its button, a profile switch button that’s deliberately (I think) difficult to hit, a DPI up/down rocker behind the thumb wheel, two thumb buttons on the side, a “precision aim” button, and a thumb scroll wheel. Whew! Yeah, not as many as a Naga or something, but these aren’t organized in a handy grid. That said, they’re also easily accessible to your fingers, and although I found the thumb buttons a bit mushy and the DPI down a bit hard to hit, they’re not bad. The precision aim button lets you slow down the mouse’s movement to whatever degree you like (it’s a configurable setting), and it’s placed pretty well, but it’s remarkably stiff. I had to concentrate in order not to hit the right click button while gripping the mouse hard enough to hold precision aim down.

The 5600 DPI sensor is more or less dead center, and tracked accurately under the conditions I tested it on. Unfortunately, though, I also found that allowing the weight of your hand to fall on the palm rest often resulted in significant cursor movement. Most mice have a large, flat footprint and no “overhangs,” so putting your weight straight down on any part of a good mouse won’t cause movement — only sideways pressure will do that. But the R.A.T. 9 and a few other mice with design flourishes have fallen into this design trap. The configuration utility is pretty spartan. You can easily string together keys and mouse buttons for macros, but there are no common commands built-in, like “Launch…” or “Double-click,” which means you’ll have to roll them yourself. Setting DPI presets and managing profiles (gaming, working, etc) is easy, though.

The mouse is wireless, and except for the lack of a cord, you’d never know it if you went by the latency and performance. After I got used to the shape, I was doing just fine, though I still prefer the sculpted shape of the Mamba or the simple lozenge of the Xai, personally (I could just be accustomed to them). Unfortunately, the battery life is not so hot. They give you two battery “cartridges,” one of which should be charging in the combination charger/wireless hub. I’d say these things last six or seven hours with serious mousing. I’ve had to change the battery every day, or twice when working and then playing Fallout: New Vegas until late. Thankfully, switching the battery only takes about 10-15 seconds, but it’s a pain to see that red light blinking, and you always think “What? I just did that!”

It’s certainly an original piece of work, and for a power user, it could be amazing, as long as you don’t mind switching out the battery every day. And it certainly looks cool, or if not cool, then at least interesting. But I don’t think it’s going to offer superior performance in any way over a Mamba or Logitech MX Revolution. It’s no slouch, either, it just doesn’t excel in anything except design. 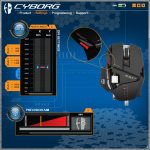