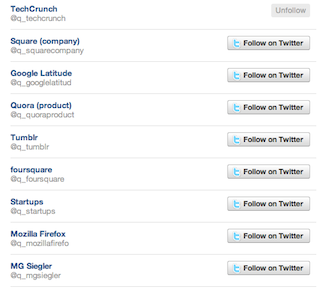 Early last month, we noted that Quora was doing something rather interesting. They were using Amazon’s Mechanical Turk to mass-create Twitter accounts. That may sound shady, but it really isn’t. They’re doing it as an alternative to RSS feeds. And Twitter is totally cool with it.

Those feeds are now live and ready to roll. As Quora engineer Belinda Gu writes on (where else) Quora:

There are now official Quora Twitter accounts for the majority of topics on Quora, e.g. q_startups, q_food, q_quora.  Each topic Twitter account tweets out a stream of the new questions being asked on Quora in the given topic.

Yep, nearly every single Quora topic now has a Twitter feed. No words on how many that is, but it’s a lot. In fact, I’m going to venture to say that Quora has the most Twitter accounts of anyone now. Though Google was trying to give them a run for their money for a while. But they were doing it the hard way — manually.

It would seem that an obvious idea for those would be to create a Quora list on Twitter so you can follow these feeds without having to have them all clog up your main feed. Unfortunately, the way it works right now is that @QuoraQuestions accounts tweet out the info and the Quora topic account you subscribe to retweets it if the question is about that topic.

In other words, if you followed these accounts in a list, nothing would show up. Because retweets don’t show up in lists (at least not yet).

Oh well, it’s still an awesome use of Twitter for the spread of information quickly. Meanwhile, Twitter just likely added tens of thousands of “users” to their stats — perfect for massive valuations!