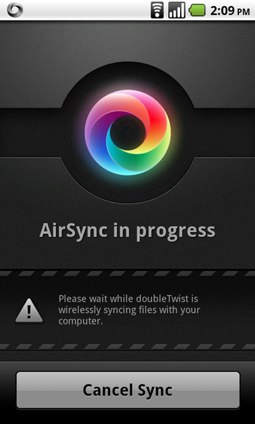 Earlier today, Winamp released a new version of its Android application that allowed users to sync their music wirelessly with their Windows desktop (disclosure: Winamp and TechCrunch are both owned by AOL). It’s a great feature, but in the race to become the ‘iTunes of Android’, another contender may already be about to lap Winamp.

We’ve been tracking DoubleTwist and its close affiliation with Android for over a year now. The company offers a desktop media player that looks a lot like iTunes (which is no accident given the ‘iTunes for Android’ theme), and it’s added support for the Android App Store, a music store through Amazon MP3’s API, and a directory of Podcasts. Today it’s launching what’s probably its coolest feature yet: wireless sync, which they’re appropriately dubbing ‘AirSync’. And it’s not just for music — DoubleTwist will let you wirelessly sync your movies, music, and photos.

Given how powerful the feature is, setup is relatively painless. Install the latest DoubleTwist client for your Mac or PC, then download the new version of the Android app. Set your phone to connect to the same Wifi network as your computer, fire up the Android app, and hit the new ‘AirSync’ button. The desktop app will detect your phone, ask you to key in a passcode (this is similar to the Bluetooth pairing process), and from there you can configure the application to sync music, photos and video (photo sync is only available on Windows for now, but is coming soon for the Mac version).

All in all, the process takes around three minutes, though the sync itself will take significantly longer — possibly hours —depending on your Wifi speed. There is one caveat though: DoubleTwist’s Android application has historically been free; that’s still true for the basic functionality, but you’ll have to upgrade to a paid version if you want AirSync — it’s a 99 cent upgrade for the first 10,000 users, and then will jump to $4.99 for everyone else.

The coolest part about AirSync is that after the initial setup, everything should work automatically. Whenever you walk within range of your wireless network, DoubleTwist (the desktop client) will detect any new content on your phone and sync it back to the computer; you can also sync new content from your computer back to your device. This means that you can go out and shoot some videos on your phone, and, provided you don’t walk immediately to your computer after getting home, they should already be waiting for you when you sit down at your desk (Ok, this also assumes you leave your computer on).

It’s quite impressive. Unfortunately there appear to be some issues — my phone got very sluggish during one sync — but I suspect DoubleTwist will iron most of these out over the next few weeks.

In a word, this is the future. Whether DoubleTwist or Winamp or an official solution from Google becomes the standard, a world without annoying tethering is clearly the way things are headed. DoubleTwist is the first that offers such deep integration, and it’s definitely worth checking out.

Given the timing of the launch (which was originally slated for yesterday but was pushed til today to QA test a new version), I reached out to DoubleTwist to see what they thought of Winamp’s release. Aside from pointing out some feature differences (Winamp doesn’t support Macs and is for music only at this point), they also had this to say — they’re not exactly mincing words:

In general, we do not consider Winamp a competitor as they are geared towards a specific subcategory of users who don’t mind endless menus, preferences and options. We are more focused on the mass market, average user who just wants to make the most out of their device without being overwhelmed by technology. 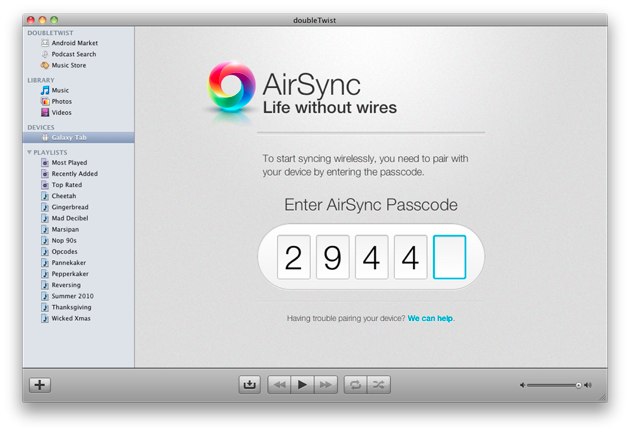