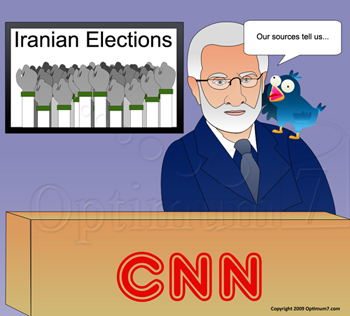 Earlier today, Reuters ran a short interview with Twitter co-founder Biz Stone in which he talked about the possibility of tweets being used to create a “Twitter News Service”. It seems pretty likely that Stone was just running with a hypothetical idea that was on his mind at the time of the interview. (Okay, it seems very likely.) And in fact, it’s hardly the first time a Twitter co-founder has talked about similar ideas in the press — which nothing ever came of (at least not yet). But that doesn’t mean it’s not an interesting idea. As Stone tells Reuters about Twitter, “From the very beginning this has seemed almost as if it’s a news wire coming from everywhere around the world.”

Back in the early days of Twitter, it wasn’t the mundane updates from web people that made the service so interesting to me, it was when it started being a go to place for realtime news. This started with Twitter’s ability to spread links faster than other services at the time. But it quickly escalated into something much more when an earthquake would happen somewhere else in the world, or a massive fire would break out. People would be there, on the ground, tweeting about it in realtime. It made the traditional news outlets look like absolute dinosaurs. So it shouldn’t be any surprise that now, a few years later, many of them are using the service on a daily basis to augment their news coverage.

Ask yourself this: if a news story was breaking right now, which would you turn to first: your television or Twitter? For many people, it’s now the latter. Twitter is simply a faster way to watch events unfold, and to get more information from all sides. Sure, a lot of misinformation is spread on the network too, but the ecosystem is actually pretty good at quickly filtering out what’s fact from fiction. And it sounds as if Stone is thinking about this as well.

“Stone said he envisaged other news organizations might take more specialized access,” according to Reuters. That seems to imply that Twitter could potentially create a new, focused tweet firehose that news organizations could use. Perhaps they could be given all the information coming into Twitter about a story, and they’d be in charge of sorting through it and picking fact from fiction. If Twitter had a way to quiet the noise and focus the stream in such a way, this would be very valuable information to any news organization.

Further, Stone later says that Twitter could also offer a service where the outlets could easily get in touch with Twitter users on the ground of a story, to perhaps turn them into instant embedded reporters.

Of course, the big question in this big hypothetical scenario would be if Twitter could or should make money from this? Reuters notes that Twitter sells access to their firehose of data to Google, Microsoft, and Yahoo, implying that such a news firehose might be for sale as well. And many news outlets would likely pay for such a thing.

But Stone uses the words “open” and “shared” in his actual quotes. If Twitter actually wants to “be a force for good“, perhaps such a service is better left free. Otherwise, they’d be dictating who got access to potentially important information based on financial agreements.

Of course, all of this is just hypothetical anyway. Again, Twitter has “no plans for a ‘Twitter News Network’“. But never say never. Especially when there’s clearly something to an idea.

Update: And here’s a link to the video of Stone’s interview with Reuters. Note that Stone says Twitter would obviously be open to partnering with any news networks on such an idea.