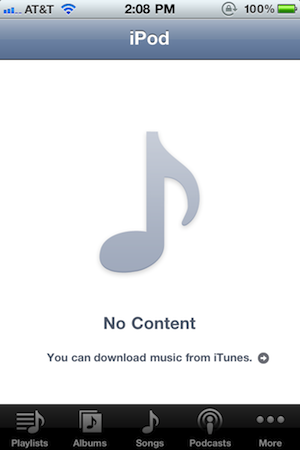 As you’re probably well aware by now, iOS 4.2 (technically, iOS 4.2.1) has been released by Apple today. The update unifies iOS across the iPhone, iPod touch, and iPad for the first time. But it also comes with an annoying bug that some users are seeing.

After you update to the new OS, if you load the iPod (Music) app, you may see a message stating that your currently have “No Content” on the device. The problem is that many people do. For example, I have 7.8 gigabytes of audio on my iPhone, but after the update, none of it could be located. Luckily, there’s an easy fix.

As you can see in this Apple Discussion forum, others are having the same issue. The way to fix it is apparently to plug your iPhone back into your computer, play a song from the iPhone on your computer, and then sync. The process is very quick because it doesn’t actually have to transfer all that music again, it just makes it recognize that it’s already there. Sure enough, my content is now back.

Oddly, it looks as if this issue may only affect the iPhone 4. I updated an iPhone 3GS earlier and see all my music just fine. Likewise with the iPad.

Update: A few people have since said that the problem affects iPod touches as well.