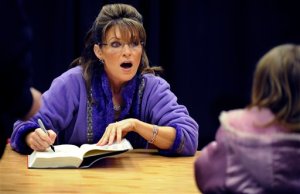 On Thursday, I suggested that Sarah Palin’s kids’ ill-judged behaviour on Facebook could be traced back to their mother’s attitude towards online critics.

The post garnered a range of considered and thoughtful responses from commenters, ranging from warnings that I should expect to be shot, to the suggestion that (I quote) “PAUL CARR PROBABLY ABORTED I.E. MURDERED ALL OF HIS OWN ILLEGITIMATE SONS & DAUGHTERS.” One helpful commenter even suggested I “go home and talk to [my] children. Tell them your a traitor to your country and your fellow Americans” – which, given I’m a Brit, was somewhat wrong-headed and, given I apparently killed all of my children, was remarkably insensitive.

For all the sound and fury, though, there was one distinct theme: that, in the absence of a clear technology angle, stories about political figures have no place on TechCrunch. And that’s a reasonable point: the Facebook angle was a stretch; a flimsy hook on which to peg my broader thesis that Sarah Palin is setting a terrible example to her kids. Kids who she herself thrust into the spotlight the moment she put them on stage at the Republican National Convention. Because she’s just an awful, AWFUL human being.

Nonetheless, never let it be said I don’t listen to my critics. The next time I write anything about Sarah Palin (who, for the avoidance of doubt, I dislike intensely), I’ll make sure there’s a totally iron-clad justification for it to appear on TechCrunch. Like if, for example, she uses Twitter to prompt her publisher to take legal action against a hugely popular gossip blog for reposting extracts from an electronic copy of her new book. Which she’s been heavily promoting through social media.

The story began when Gawker- taking a rare break from paying for lurid, non public-interest tittle-tattle about celebrities’ sex lives – acquired an advance pdf copy of Palin’s new book, “America By Heart” (original title: “America Written On The Back Of My Hand”).

Arguing the fair use doctrine – which allows “limited use” of copyrighted material for the purposes of criticism, review or news reporting – the blog posted various extracts of the book, along with their “trademark” “snarky” “commentary”. It wasn’t long before Palin, spotting another opportunity to pose as the victim of a conspiracy by members of the media establishment , raced to Twitter… 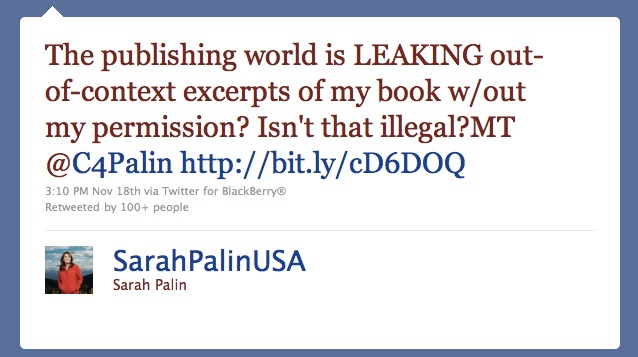 The short answer to Palin’s question is “no, probably not”. But I’ll forgive Sarah Palin for not having read the law before commenting on it; after all she thought Laura Schlessinger quitting her radio show was a first amendment issue. What’s takes a bit longer to fathom – save through the cynical lens of publisher idiocy – is the grounds on which Palin’s publisher, Harper Collins, fired off a cease and desist letter to Gawker. And why, when Gawker ignored the letter, they decided to go ahead and sue for breach of copyright. Still, for good or ill, a federal judge in New York has now ordered Gawker to remove the post and barred them from “continuing to distribute, publish or otherwise transmit pages from the book”, pending a hearing on November 30th.

Much of initial online commentary around the story pointed out how clueless both Palin and Harper Collins are when it comes to the promotional benefits of having a book extracted online. There’s almost no evidence to suggest that having even lengthy chunks of a work available for free does anything but encourage sales. This is particularly the case with an author like Palin: her army of supporters will buy the book anyway (not least because most of them don’t read Gawker), her army of opponents won’t, and those sitting on the fence now have an additional opportunity to try before they buy, much like they could in a book store. Thus, from a purely promotional point of view, Gawker’s post – snarky as it was – can only be A Good Thing.

But arguing on that point alone shows a lack of understanding of how publishing works. Publishers know damned fine that releasing previews of books before publication helps sales. My next book isn’t out until early next year but already there’s half a forest’s worth of preview copies of the (non-final) manuscript floating around the offices of journalists, bookstore buyers and anyone else who might be useful to the book’s prospects. Eventually my publicist will sidle up to carefully selected publications and offer them copies of the complete, finished book, in the hope that they will be interested in reviewing it or – better yet – publishing a lengthy extract.

In the case of my book, that extract will almost certainly be offered for free (the promotional benefits of being syndicated in a newspaper are consideration enough) but in the case of a book like America By Heart, the first syndication rights could be very valuable indeed. And therein lies the real point of the Harper Collins / Gawker lawsuit: by publishing unauthorised extracts from Palin’s book, Gawker has seriously damaged the publisher’s ability to earn a fortune from selling those extracts to others. They’ve also upset a meticulously planned timeline whereby extracts will be released to the press at a succession of times designed to optimise the publicity surrounding the book. No wonder Palin is pouting and Harper is suing: Gawker just cost them both a shit-ton of money, and screwed up a publicity plan that was months in the making.

Unfortunately, though, the reality of the Internet / social media / whatever it’s called this week – age is that publishers simply don’t have the luxury of controlling the flow of information any more. The idea that they can release thousands of preview copies of a new title, in electronic form, weeks (or even months) ahead of publication and rely on a gentleman’s agreement with the press that their embargo will be respected is simply laughable.

Wholesale piracy is one thing, and if Gawker were offering the complete downloadable pdf (or even a full chapter) then the lawsuit would be both right and proper. But the only way to prevent fair-use extracting online is either to forgo the distribution of preview copies entirely, or to take a leaf out of Apple’s book and escort the preview editions from door to door under armed guard. Neither of those suggestions is practical, or desirable.

The only option left to publishers, then, is to engage with high-traffic bloggers, rather than fighting them. The first step down this road requires the book industry to realise that their days of controlling who can publish pre-publication extracts of hot titles are over. It won’t be an easy realisation, much as it wasn’t easy for PR people to comprehend that their days of holding journalists to embargos on press announcements were behind them.

The second step demands that they get creative: having realised that the moment they start distributing preview copies, it’s only a matter of time before extracts start to show up online, they should focus their attentions on owning that process. Create a pdf of all the funny, juicy or in other way controversial extracts of the book and send it to bloggers; encourage them to publish the extracts, along with their own commentary, snarky or otherwise. Many minor-league bloggers be flattered by the suggestion, others will just be glad of the free content. As for the bigger blogs; any snark on the part of sites like Gawker will hopefully be balanced out by more positive coverage elsewhere (unless your author really is evil, but why would you give a person like that a book deal, Harper Collins? Oh yeah.) And if any sites do publish unauthorised extracts? As long as it’s not more than a page or two, ignore it. The fight isn’t worth the candle and it probably just means you didn’t pick the right quotes to send out in the first place.

Will this new strategy reduce the likelihood of some publications paying for exclusive extracts? Probably. But that’s easy to fix too. Along with the extract, influential blogs should be offered an exclusive interview with the author, and the promise that she will provide quotes and stories that can’t be found in the book. That kind of content is un-stealable, which is why music piracy can’t make a dent in the profitability of live performance. Given the choice between a sit-down with Palin or the crappy traffic he got from the book extract, I guarantee Denton would take the sit-down. Hell, he nearly soiled his pants when Fred Durst sent him flowers.

I’ve long been an advocate of protecting intellectual property, and an opponent of slackening the laws just because the Internet makes everyone a thief. But what’s happening here has little to do with the law and everything to do with publishers trying to cling on to their ability to control every aspect of the promotion of their titles. Gawker’s publication of quotes from America By Heart is just the latest example of that reality. Now it’s down to publishers whether they waste even more time and money on legal fees, or refocus their energies on new and more interesting ways of promoting authors and their work.

Sadly, especially given today’s judgement, I suspect I know which approach Harper Collins and Sarah Palin will take.

(Next Week: Sarah Palin embarrasses herself on FourSquare, is still awful)