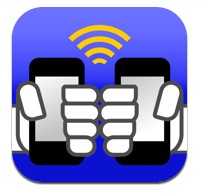 There is something about exchanging information by bumping fists that is deeply satisfying. What I like most about the iPhone app Bump is that it’s different. Its features are nifty enough; transfer money, information, and as of last week, music to someone else by tapping your phone against theirs. More importantly, though, it’s a harbinger of the next wave of the mobile revolution.

Most app developers treat smartphones as little more than very small laptops. Location-based apps are the only real exception, which is why they’ve provoked such excitement. But that is obvious low-hanging fruit. Only a very few apps take advantage of the fact that smartphones are constantly with us, portable enough for actions that laptops can’t perform, and frequently within range of a shifting mesh of other devices.

Apple and Google bear much of the blame. In theory, their devices can talk to the nearby world via Bluetooth. In practice, though, the two titans have wired Bluetooth’s jaw shut. Apple’s API only permits connections to very simple services (keyboards, headsets, etc.) or other iOS devices—for anything else, developers must join a special program and sign a sheaf of NDAs. Android is far more open, but still requires explicit user approval every time an app asks to connect to a new Bluetooth device.

You can see why. Apple doesn’t want users downloading songs from iTunes and immediately beaming copies to their friends, and Bluetooth is a battery hog and security threat. But there are other solutions, such as an HTTPS-like certification mechanism. The existing restrictions have all but eliminated a whole genre of apps that could have been: for instance, only a tiny handful of multiplayer games allow Android and iPhone users to go head-to-head, and I’m sure GroupMe would love to form groups out of Bluetooth mesh networks connecting every enabled device in a given room.

Alas, Bluetooth won’t be unshackled anytime soon—but a whole new kind of connection is about to emerge. Last week Google confirmed that Android 2.3 will support Near Field Communication, as will Nokia and RIM smartphones, starting next year. And judging from Apple’s recent hiring of an NFC expert , and patent filings for a probably-NFC-powered iTravel app, the iPhone 5 will boast NFC too.

(Full disclosure / odd coincidence; the iTravel app currently in the App Store was created by, er, me. Let me stress that it has nothing to do with whatever Apple is cooking up.)

NFC opens up a whole cornucopia of possibilities. Phones serving as credit cards, keys, and ID are the most obvious, and least imaginative. Interestingly, NFC can also be used to automatically authorize Bluetooth connections. Next year we’ll see the emergence of a whole new category of apps and startups—and, hopefully, some new unexpected left-field brilliance. Developers, start your engines.

But spare a thought for Bump in this brave new world. What need will anyone have for a service that brilliantly mimics NFC, once the real thing appears? They might eke out a year or two as a substitute service for obsolete phones, but beyond that, I’m sorry to say, the only answer is none whatsoever. So long, Bump. You were a bold pioneer. Cash out while you can, and rest in peace.