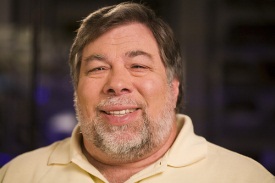 Apple cofounder Steve Wozniak was being his fascinating self again this morning, revealing in an interview with Dutch newspaper De Telegraaf that the company he helped get off the ground actually developed a smartphone in partnership with a well-known Japanese electronics company as early as 2004, but shelved the project prior to its debut (via Engadget).

Apple introduced the first iPhone on January 9, 2007 at Macworld.

Wozniak in the interview with De Telegraaf touted the iPhone as a quality device, but went on to say that he thinks Android will eventually become the dominant mobile platform, and slammed Nokia for being a “brand of the previous generation”.

Interestingly, the charismatic übergeek says Apple co-developed a smartphone in collaboration with an unnamed Japanese electronics company that was way ahead of its time, which ultimately led to the phone being shelved. Translated, here’s what he told the reporter:

“Apple was satisfied with the quality of the smartphone but wanted something it could amaze the world with. When Apple releases products, they need to be groundbreaking. Companies should hold off on entering markets until they have a seriously compelling product to offer. Products like that need to be be developed in isolation from the rest of the company, and it requires developers to steer clear from paths already traveled.”

Wozniak also said in the interview that he believes Google’s Android platform will become the dominant mobile OS over time, rather than Apple’s iPhone. He likens Android’s success to that of Microsoft’s Windows operating system, along with the flaws and challenges of that model.

The cofounder of Apple said there’s work to be done on Android in terms of quality and user satisfaction, and he also said the platform isn’t always as consistent as it needs to be. He did acknowledge that Android in time will grow up to rival Apple’s iOS in terms of quality, touting its openness and larger feature-set compared to the iPhone, which he added “isn’t for everyone”.

“The iPhone has very few weak points. There are no serious complaints or issues. When it comes to quality, the iPhone leads the way. Apple has shown the world what direction we’re going. Android phones do come with more options, though.”

At the end of the interview, Wozniak also comments on Nokia, saying that the Finnish company struggles with an image problem and calling its brand that of a “previous generation”. He suggested Nokia should launch a new brand specifically for youngsters.