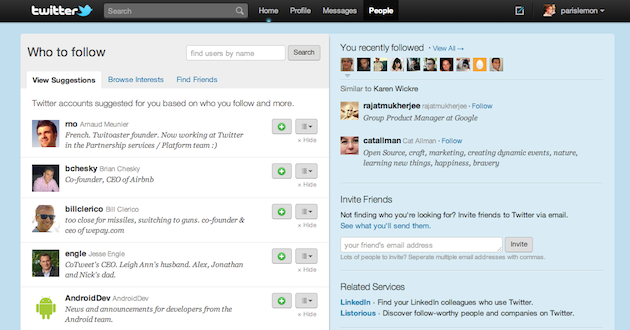 Since the launch of New Twitter in September, things have been pretty quiet on the new feature front. Yes, they’re testing out a new analytics product, but in terms of features that the majority of end users will use, Twitter has mainly been letting people get used to the new layout of things. But now they’ve started testing something new. A new top nav tab called “People”.

The area, which Twitter has confirmed their testing among a limited number of users, is basically a way to pull together all of the work they’ve done with features like “Who to follow” and “Similar to”. This new area, which resides to the right of the Messages tab, is all about finding new users to follow.

The initial tab on this new page shows you personalized follow suggestions based on who you are already following. This is the same as the “Who to follow” area in the right pane of New Twitter, but it’s expanded to show more accounts at once (the “view all” link on Who to follow on the main page takes you here as well). And not only can you follow these people, from here you can add them to lists (very nice just in case you don’t necessarily want to follow all of these people but are interested in seeing their updates sometimes).

The next tab is a “Browse Interests” one that is essentially the suggested user list broken down into 20 or so categories like Books, News, Politics, and Technology. The idea here is obviously to pick something you’re interested in and follow the accounts that Twitter considers to be the most interesting about those topics. This is the same area that new users see when they’re going through the onboarding experience.

The third tab in the People area is for Finding friends via Gmail, LinkedIn, Yahoo, Hotmail, and Messenger. This is fairly standard, and basically the same as it has been for some time. But you’ll note that Facebook is nowhere to be found. There’s a reason for that.

Like New Twitter itself, the People area also features a right pane with other information. Here you’ll find a pretty cool new feature that shows you who you have recently followed and if you click on their icon, below them are two users that are similar to that user, who you can also follow with the click of a button.

Again, all of these things have existed in some form or another on Twitter before, but now Twitter is testing adding them all in one area front and center in the main top nav. And that makes sense, each of these tools are great for pumping up Twitter’s social graph and making the service more interesting to users.

Update: Others who are reporting seeing the new area note that it’s called “Who To Follow” or “Directory” in their nav. It looks like Twitter is testing out a bunch of different names. It’s worth noting that the URL is “who_to_follow”.

Update 2: And Twitter notes that the area is actually available now to all users now here — but the nav is in testing. 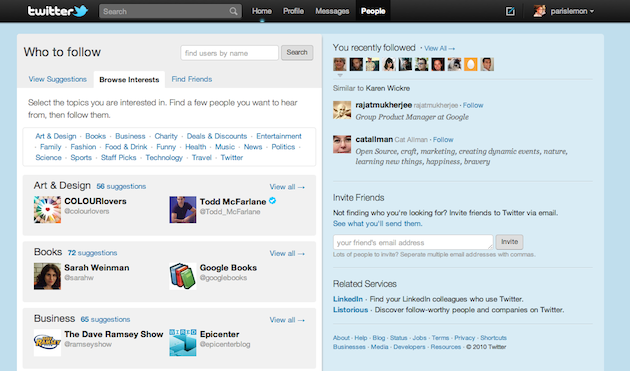