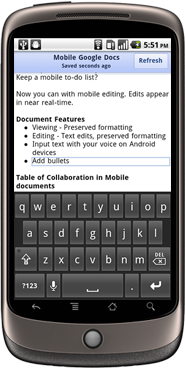 Native applications may be all the rage these days on mobile phones, but plenty of companies — and developers — would love to see web applications take the lead. One of the biggest advocates has, unsurprisingly, been Google, and it’s actually walking the walk: its Gmail mobile web app is among the best I’ve used to date. Today, the company is bringing another of its web apps up to speed: Google Docs is finally getting the mobile treatment it deserves.

Up until now, you’ve been able to access Google Docs from your iPhone, iPad, or Android device without any problems, but it’s been read-only access — there was no way to edit a document. That’s changing in the next few days, as Google begins to roll out support for document editing.

I just used the new feature on my iPad and it worked as you’d expect. Tapping in a text field will bring up your device’s keyboard and you can start typing away. Changes will appear in “near realtime” for other users who are editing the same document, and you can use Android’s voice transcription, too.

One thing that’s apparently missing: document creation. It’s possible that I’m losing it, but I can’t find an option to create a new document anywhere; it looks like you can only edit existing docs for now. Update:: Google says you can add new documents (I think this may have been added since this morning).

You can find Google’s blog post on the news here.