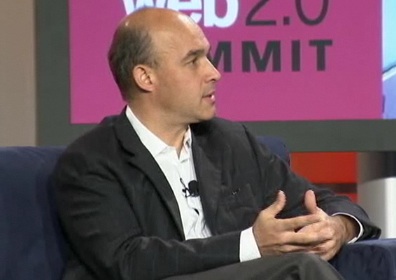 Research in Motion CEO Jim Balsillie may still be smarting from the fact that Apple passed it in smartphone market share last quarter. Steve Jobs made a point to rub it in during Apple’s most recent earnings conference call: ““We’ve now past RIM, and I don’t see them catching up to us in the near future.”

Asked what he would say to Jobs if he were present today at the Web 2.0 Summit, Balsillie shot back: “You finally showed up.” The implication being that RIM practically invented the smartphone category and is not going anywhere.

Balsillie went on to contrast the Blackberry approach to Apple’s when it comes to web apps. There may be 300,000 apps for the iPhone and iPad, but the only app you really need is the browser. “You don’t need an app for the Web,” he says, and that is equally true for the mobile Web. The debate over mobile apps versus the mobile Web. Blackberry is betting on the Web, much like Google.

And to usher in the era of a fully browsable mobile Web, RIM is positioning its upcoming PlayBook Blackberry Tablet as super Web-capable. “It will be 3 to 4 times faster than the iPad,” boasts Balsillie.

RIM even put out out this teaser video showing how much faster the PlayBook is at several browsing tasks than the iPad, including its support for Flash. (This is not exactly an independent, unbiased test, but it should be easy enough to replicate once the PlayBook is available in the first quarter of 2011. But even if it is faster, that still might not be enough to make the PlayBook a success.