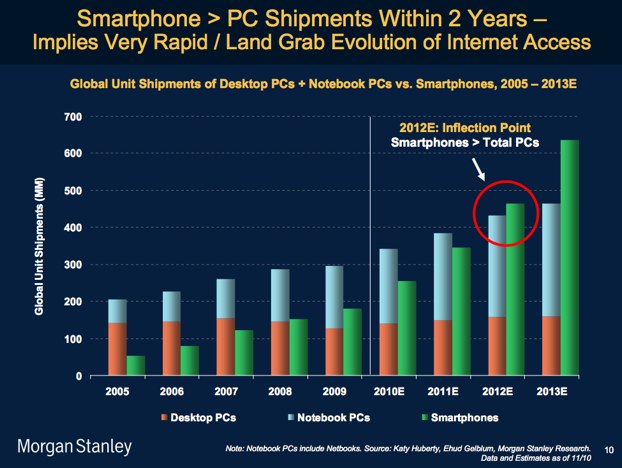 Every year at the Web 2.0 Summit, Mary Meeker gives a ten-minute slideshow packed with great data showing the monetum and direction of different Internet trends. This year, a big focus of her presentation was on mobile. Specifically, she put up the slide above showing a Morgan Stanley estimate that global smartphone shipments will eclipse PC shipments in 2012, with more than 400 million smartphones expected to be shipped that year, compared to less than 200 million last year.

This prediction is reasonable. Smartphones are cheaper and phones, in general, are more ubiquitous. To the extent that all phones are becoming smartphones, they will be much more accessible and portable and than PCs (laptops included). They are certainly becoming just as capable, at least as far as surfing the Web is concerned, not to mention the hundreds of thousands of apps available for platforms like the iPhone, Android, and Blackberry.

If you look at only Apple iOS devices (the iPhone, iPod Touch, and iPad), they have ramped up faster than any other technology, including AOL and Netscape in the early days or NTT Docomo’s imode mobile Web phones a decade ago. The slide below compares the growth rate for each technology over the first two dozen quarters of their existence. 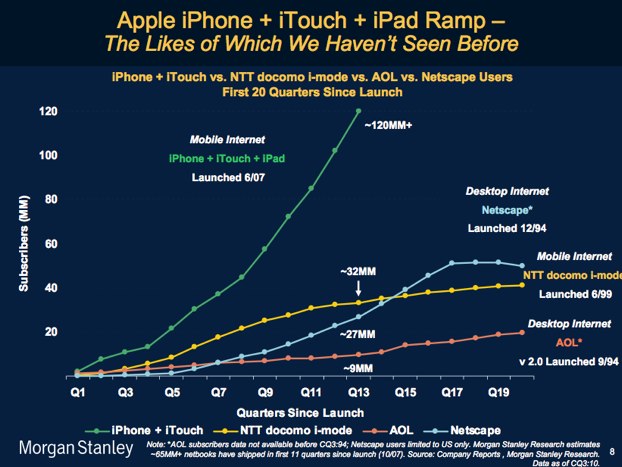 Add Android in there and combined with Apple’s iOS, those two platforms now account for 42 percent of smartphone operating systems shipped in the third quarter of 2010. What does this mean for the Web? Meeker extrapolates from the experience of Japan, where social networking on mobile devices rapidly took over from the desktop about three years ago and now accounts for 84 percent pageviews for Mixi, Japan’s largest social network. Will the same thing happen in the U.S. to Facebook? Facebook is certainly preparing for that eventuality. 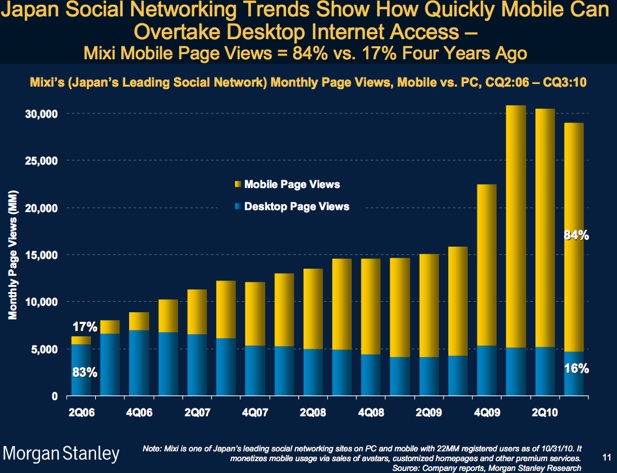