Our definitive coverage so far:

Facebook Acquired FB.com From The American Farm Bureau To Use Internally

Zuckerberg: Our System Is Not An Email Killer. But If It Dies As A Result…

We’re here at the Facebook Event at Yerba Buena Terrace, and Mark Zuckerberg has taken the stage to talk presumably Facebook’s new mail client, Project Titan. From what we hear this isn’t just an outgrowth of Facebook’s messaging feature, this will be a full on web client like Gmail except leveraging your social graph.

There’s been quite a lot of speculation since the invites went out last week on what this announcement would entail; Whether the general public would get POP and IMAP support, whether we should expect @facebook.com email addresses (or @fb.com) email addresses as well what exactly not being able to export your Facebook contacts to your Gmail and vice versa will mean  for users.

Stay tuned for updates and tune into the Livestream of the announcement, which starts at 10:00 am, above.

9:59 am — Mark Zuckerberg has taken the stage and reveals that they moved this event to SF because of Web 2.0 Expo.

10:01 — He’s now recounting a story about how talking to high school students about email he realized that “Email is too slow.” It’s not that email doesn’t get delivered immediately, it’s that it’s too formal because there’s all this extra stuff that gets attached to an email.

10:02 — Highschool kids don’t use email, they use SMS a lot. People want lighter weight things like SMS and IM to message each other.

10:03 — 350 million people messaging on Facebook, 4 billion messages sent each day and that’s growing at an alarming rate. The vast majority of this is messages between people. 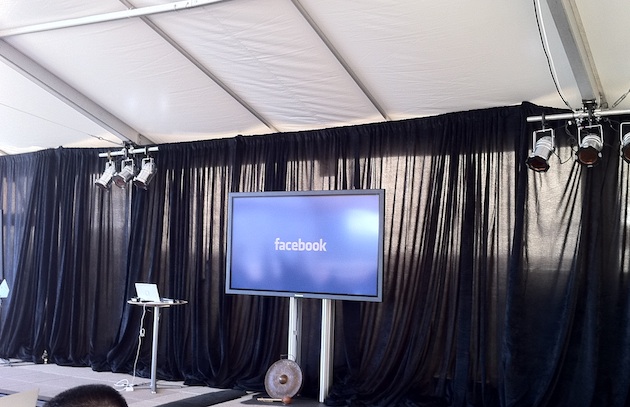 10:06 — Zuckerberg bring up the idea of “Next Generation Messaging” which is seamless, informal, immediate, personal, simple, minimal, short. “You shouldn’t have to wade through a complex product.”

The three main elements of the product being announced today are:

Communication across all the different ways people like to message, including but not limited to email.

A record of all your contacts with people all in one place.

Social Inbox sound like the most important feature here with regards to personalization. “The real way to deal with spam and filtering is to build whitelists, but nobody wants to make lists. Your  default experience is personal messages for you.”

10:13 — Facebook Product Manager Andrew Bosworth has taken the stage and has brought up a slide of different devices, SMS, Messaging and email. While people will be getting a Facebook.com email address, Bosworth says that this product will not be just focused on email.

Bosworth announces an iPhone application — “People should share however they want to share, if you want to send me an email and want to get it as a text message, it should work.”

10:18 — Bosworth is getting into the Conversation History feature,“Individually these messages may not be profound, but collectively they had meaning.”

Bosworth is saying that in order to launch Fmail Facebook needed to completely rebuild their infrastructure, moving from Cassandra to hBase and extending their photo sharing application (Haystack) to support attachments.

This is the biggest engineering team (15 engineers) Facebook has ever put together for a product.

10:22 — Bosworth is now showing us the Social Inbox feature, which prioritizes messages from your contacts. Social Inbox will separate messages into three folders, Messages, Other, and Junk. Your social graph will determine what gets sorted in the messages folder.

10:25 — Zuckerberg is back onstage, “This is not a Gmail killer.” This is about messaging and not email. Our goal is to push email to seamless and simple messaging.”

10:28 — Facebook will be rolling out the feature starting today. 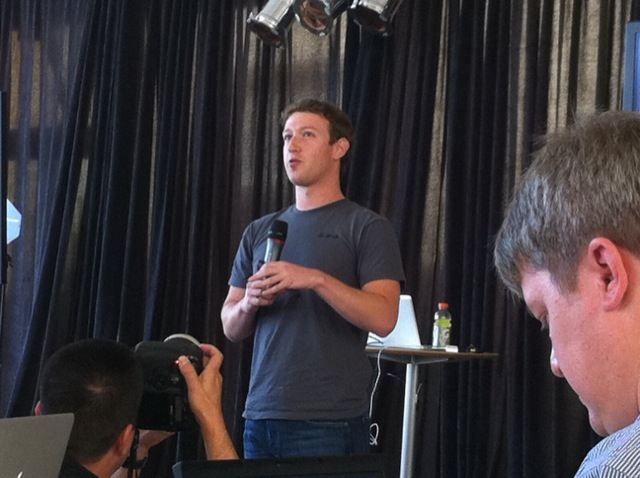 Q & A — We’re now getting into Q&A. First question “What does this not do that you want it to do?

Zuckerberg’s answer: “We wanted it to have IMAP support.” It currently doesn’t.

“We want people to not have to think about this stuff,” says Zuck.  He explains that person can trigger from the interface what device they want to send message for. “If you get a message and you’re online then you will get it through an IM.”

Bosworth jumps in “Our goal is to make this feel like a conversation.”

In response to a question about whether the product will integrate voice, Zuckerberg says that they are currently focusing on SMS, IM, Email and Facebook messages.

On how this will interact with Facebook ads, Zuckerberg says that nothing specific will change. On whether this will compete with Google, “This isn’t a Gmail killer, this is a Gigabox killer.”

On the deletion of emails, users will have the ability to delete whatever messages they want.

Question from the audience: “Is this the biggest technical challenge for Facebook to date?”

Bosworth: “This was definitely a big challenge, don’t want to start a nerd fight by saying it was the biggest.”

Audience Question: “Right now I have conversations with people that are not on Facebook, what does that mean for my communications?”

Zuckerberg talks about the social design of the Social Inbox feature, that eventually if you keep emailing a contact the algorithm will adjust and bring those communications into the Messages folder.

Zuckerberg expects people to use the product as such, people will be checking their main folder Messages, repeatedly and the other two folders only occasionally.

On what Facebook employees will be using for email, “The farm bureau has agreed to give us FB.com and we in return have agreed to not sell Farm subsidies.”

Message forwarding will be enabled. You will also be able to add people and delete people to the thread. Bosworth dodged the question on size of storage space, and wrapped up the event asking us to email them @facebook.com. Wait, what?