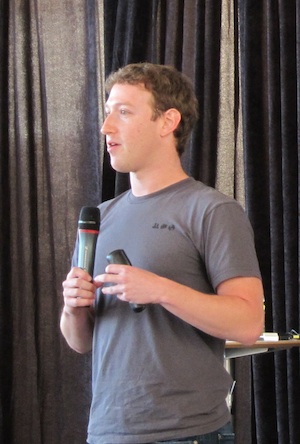 Today during the unveiling of their “modern messaging system“, Facebook CEO Mark Zuckerberg had quite a bit to say about the rumored death of email with the coming of their product. “This is not an email killer. This is a messaging experience that includes email as one part of it,” Zuckerberg said.

Of course, he then went on to say that if in the future, Facebook’s system fundamentally alters the way people communicate and email is depreciated over time, that would be okay too. He said that in talking to current high schoolers (who make him feel “really old”) they don’t use email. “It’s too formal,” Zuckerberg noted.

Again, if you extrapolate that out, that means the end of email. It sounds as if Zuckerberg is just tip-toeing around calling for the death of a system that a lot of people currently use. Obviously, such a claim would cause a huge uproar (considering that there’s a huge uproar when Facebook changes a font size, the idea of Zuckerberg calling for the death of email is truly terrifying).

He also specifically talked about posts like ours calling this new system a “Gmail-killer“. “I think Gmail is a really good product,” Zuckerberg said. But again, he’s essentially saying that it’s a good product that future generations are using less and less.

He noted that email is too cumbersome. There’s a subject field, a formal greeting, a closing. Teens are using SMS and IM because it’s much simpler. And that’s what Facebook is trying to add to everyone’s life, using email as the gateway drug, of sorts.

“We think that we should take features away from messaging. It should be minimal,” Zuckerberg said.