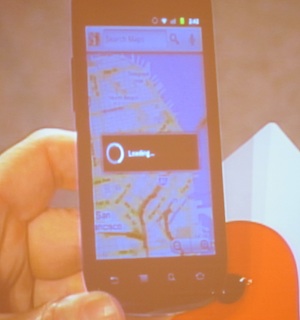 Today at the Web 2.0 Summit, Google CEO Eric Schmidt kicked off his interview by pulling out a new, hitherto unreleased Android Phone (it’s almost certainly the Nexus S). Schmidt coyly avoided talking abou the device itself, but he revealed that the newest version of Android, codenamed Gingerbread, will bring with it a very interesting new feature: Near Field Communication.

You may not have heard of NFC before, but it’s a very exciting technology (and it’s actually been around for a while). The gist of it: new Android phones will have a chip that let you tap your phone against special sensors to complete a specific action. That sounds vague, but it’s got plenty of practical applications. One of them involves credit cards — you’ll be able to hook up your credit card to your Android phone, and conduct transactions simply by tapping your phone against a sensor.

There are plenty of other possible uses too. Tap your phone against a location-aware sensor, and it can check you into whatever venue you’re standing in, without having to bother with opening app on your phone.

Another interesting point: it’s been rumored that the next iPhone will feature similar NFS technology. Google seems poised to beat them to the punch though, as it looks like the Nexus S will include the chip and other new Android devices will surely follow suit.

We’ve know that Gingerbread is coming soon; Schmidt confirmed that it’s coming within the next few weeks.