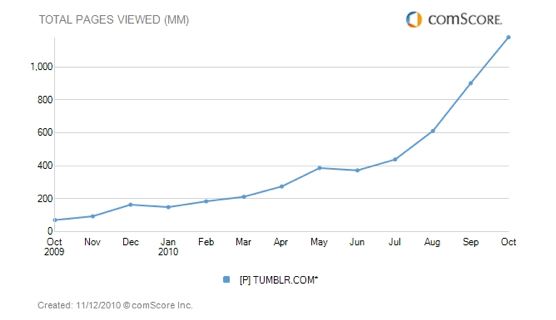 Tumblr is attracting a lot of attention right now There is talk of a big funding round in the works and it is making significant hires. Why all the interest?

Sometime last June, blogging service Tumblr hit an inflection point. It’s visitors and pageviews just took off. According to comScore, Tumblr served up 1.2 billion pageviews in the U.S. in October, up a mind-boggling 1,540 percent from the year before (see chart above). Unique visitors from the U.S. hit 6 million, up 150 percent (see chart below). Worldwide visitors in September were around 14 million.

But something definitely started to click this summer. As you can see by the charts, that is when growth really took off. U.S. pageviews were only 373 million back then. In August, it passed its one billionth cumulative post. All those posts add up. The more people who use the super-easy blogging service (there are nearly 9.7 million different Tumblogs now), the more overall readers the platform attracts, which creates a virtuous cycle of more publishers.

Update: I asked a couple VCs why they think Tumblr is growing so fast. Bijan Sabet, the partner at Spark Capital who is on Tumblr’s board, told me via a Twitter DM:

I don’t think it was one thing. It was a series of things (web improvements, network effect, david’s obsession, iPhone, etc). 100% organic.

An Fred Wilson, whose VC firm Union Square Ventures is also an investor, although he is not the partner on the board, replies:

In other words, all the kids are doing it. 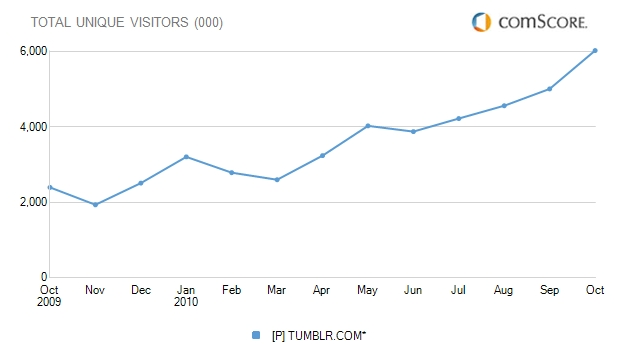