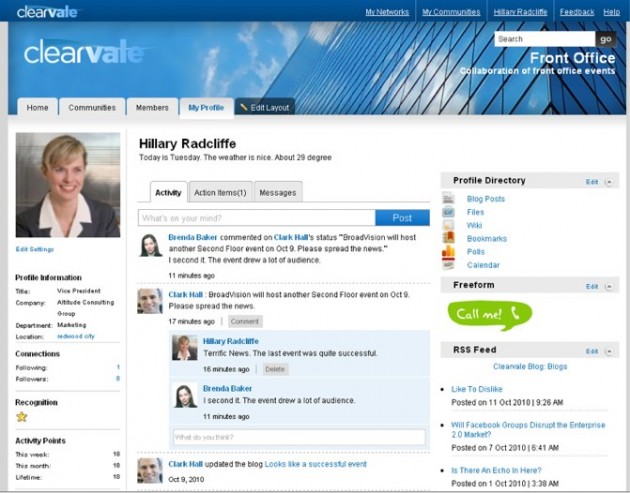 BroadVision is launching a new version of Clearvale, a “networks of networks” for the social enterprise. Launched to the public earlier this year, Clearvale provides businesses with the tools, and infrastructure to instantly create enterprise social networks, while also being able to connect with other social networks on the platform.

The Clearvale gives businesses a DIY model for building a highly customized, private social network. And with Clearvale, businesses can connect with others outside their own ecosystems.

The new version of Clearvale allows customers to actually sell their services within the network. Called Clearvale PaasPort, the service allows companies to host their own installation of BroadVision’s Clearvale
enterprise social networking solution, enabling them to sell Clearvale as well as premium services, to their own customers.

Clearvale is also launching MyStreams, a personalized data stream management and filtering system. So users can filter data from within the Clearvale network, such as updates to wikis, blogs and forums, as well as streams from email, voicemail, social media, IM and more.

Clearvale, which faces competition from Socialtext, Salesforce Chatter, and Jive, has also launched a campaign against Jive called “NoJiveTalkin.”