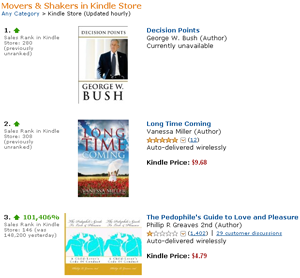 Joining Aesop’s Fables and the 7 Habits Of Highly Effective People this evening on Amazon’s Top 100 Bestsellers list is a very unlikely contender, The Pedophile’s Guide to Love and Pleasure.

Earlier today both Mike and MG used their TechCrunch power to rail against the fact that the pedophile guide is on Amazon at all (Devin has a different take). These efforts have had quite an unintended effect, namely a 101,000% sales boost for the book.

In testament to how fast something goes from zero to meme these days, the unlikely Kindle best seller has gone from #158,221 to a coveted #96 spot on Amazon’s Top 100 list.

The book has also gone from 50 reviews to 1,525 reviews, most along the lines of “This is absolutely disgusting and needs to be removed immediately. I will not be buying a single item from your store until it is removed.” A newly minted Facebook Protest Fan Page currently has over 2,500 “Likes.” Middle America is about to find out about this thing and it’s not going to be pretty.

Amazon has responded to our original post, emphasizing that they will not be taking the book down.

“Let me assure you that Amazon.com does not support or promote hatred or criminal acts; we do support the right of every individual to make their own purchasing decisions.”

“Amazon.com believes it is censorship not to sell certain titles because we believe their message is objectionable.”

Following this censorship logic, Amazon should be keep the book up on the Bestsellers List as well as long as the numbers say it belongs there. Something tells me this isn’t going to happen. We are minutes away from this hitting mainstream coverage and once the Red States get involved there’s no turning back.

Which brings me to the paradox of media — We first posted on this because some of us weren’t cool with the fact that a book that made it easier for pedophiles to commit their crimes was so easily accessible via Amazon. Our post drew awareness to how sketchy this was but also attracted thousands of Internet looky loos who thought it might be funny to buy the book. Amazon is now playing a game of chicken with the entire Internet (I wouldn’t be surprised if 4Chan is involved).

Whether Amazon eventually removes the book or not, guess who makes money when you ironically buy The Pedophile’s Guide to Love and Pleasure? Mr. Phillip R Greaves, a guy who wrote an entire book with the endgoal of “liter sentences” for pedophiles. Amazon, please take this book down.