Today, YouTube invited a group of press to its headquarters in San Bruno to highlight some of its progress over the last few months (and there’s been a lot). Topics discussed included the revamped homepage, which the company is hoping to make increasingly addictive, and a new ad unit that lets you pick the advertisement you’d prefer to watch (Hulu has offered something similar for a while now). The event also had two big pieces of product news: YouTube is a about to launch a new feature for navigating the site, and it’s also launching a new application on Android Market that creates a seamless link between your television, your phone, and YouTube’s millions of videos.

Most people would classify web search as a pretty difficult challenge — connecting people with the content they want that’s spread across the Internet takes an incredible amount of resources and advanced algorithms. And there’s a ridiculous amount of content that’s being added every day, which makes this even harder. But the folks at YouTube say that’s easy compared to what they’re dealing with.

You see, when someone goes to Google they usually have a pretty good idea of what they’re after, and they search for things like “Giants schedule” and “where to buy flowers”. YouTube has to deal with much vaguer queries that don’t really mean anything, like “LOL” and “fail”. People go to YouTube and want to be entertained, or learn about something neat, or watch something cute — but oftentimes they don’t really have anything specific in mind. Historically YouTube’s done an adequate job displaying relevant results for these searches (after all, it’s still massively popular), but it thinks it might have a better solution.

It’s called Topics, and it’s launching in YouTube TestTube tomorrow evening. The basic idea is that YouTube videos can be described using a ‘language’ of attributes showing how videos are related — which sound a lot like the tags that already exist on the site. But user-submitted tags are often useless when it comes to determining what a video is actually related to, so YouTube has done a lot of work to try to determine what attributes best describe a video, by looking at things like user submitted comments, sites that have linked to the video (and the way they’ve described it), and other data sources. 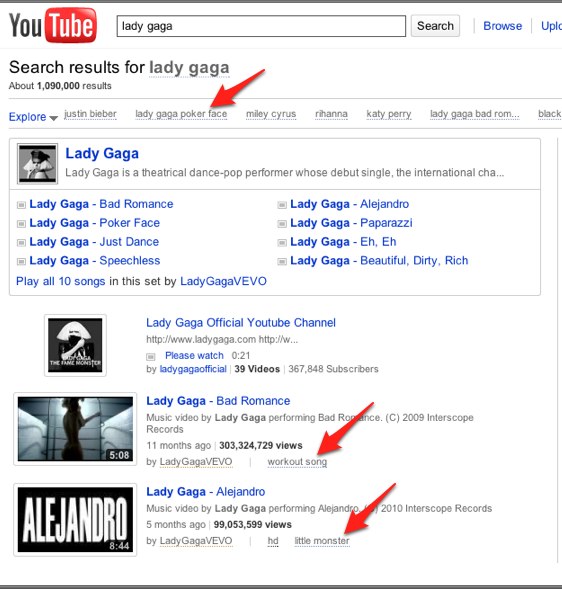 Once you’ve enabled Topics, you’ll see new links next to your video results that let you drill down into related videos. A search for “Lady Gaga” will display a handful of related artists at the top of the screen, and the videos themselves will also be tagged — Bad Romance has a tag for “Workout song”, for example. Clicking that “Workout” tag will take you to a list of other videos that YouTube believes shares this attribute, and each of these videos will have its own Topic tags to let you get even more specific.

The ultimate goal is to recommend videos to users while also giving them some context explaining why the video is being recommended. Type in a query for “LOL”, and you may be presented with a goofy cat video that’s been tagged as being both ‘funny’ and ‘cats’. But if you’re not interested in cats, you can simply ‘X’ out that Topic and further hone in on the kind of content you’d like to see.

Visually, these tags are easy to look over (and the topics listed at the top of the screen look a whole lot like less structured search recommendations). YouTube had initially toyed with using colors or visual icons to help associate videos with broader Topics, but in testing found these to be too distracting, which is why they’ve gone with the less prominent links. My hunch is that users won’t notice that anything has changed, and for the time being that may be YouTube’s goal for this. 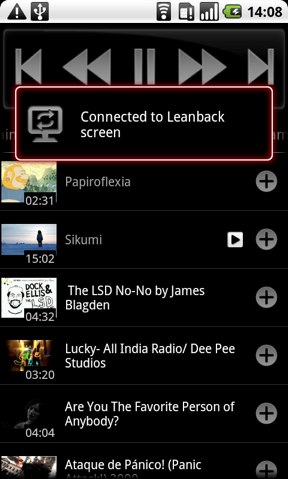 The second big piece of news involves a new Android app that’s just gone live on Android Market: YouTube Remote. The gist of the application is that it lets you start watching a video on your phone, then continue watching the same video where you left off once you get near a bigger screen (like your Google TV). It sounds a lot like Apple’s AirPlay, but for YouTube content only.

To start using the app, you connect it with your Google account. Then, when you’re watching a video on your phone and Google detects that you’ve launched a YouTube app on another device (be it your computer or LeanBack on your Google TV), it’ll assume you want to start watching the content there (you can manually delink the app if you don’t want this to happen automatically). The application also lets you control the entire YouTube LeanBack experience from your phone, without having to deal with whatever physical remote came with your Google TV.

At this point I’m not totally sold on the YouTube Remote app, but it clearly has potential. The YouTube team wants content to flow seamlessly between the devices you use, and it eventually wants to let your recommend content from one device and have it sent to a friend’s TV.

But while I love the idea of being about to use an Android device to control Google TV (instead of using the clunky physical remotes that have been the norm so far), I’m worried that this could be the start of an annoying trend: I want an Android app that can control all of Google TV, not one for each content provider, with each app having its own unique navigation structure.