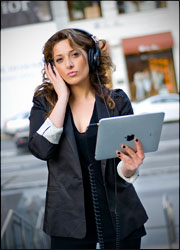 I was blown away when I first saw Rana Sobhany on stage.

With nothing more than 2 iPads and a mixer, Rana was mixing tracks and busting beats live in front of the hundreds of attendees at AdAge’s IDEA conference. You wouldn’t have been able to tell the difference between her and a DJ with a full set of gear. I realized pretty quickly that what was once a cool PR stunt had now become a full-blown business.

Rana was originally profiled by Robert Scoble after a presentation at iPadDevCamp. A few days later, Gizmodo dubbed her the “iPad DJ” and she took off – the YouTube video of her got over 600,000 views. On the face of it, this seemed like a great PR stunt. After speaking with Rana, however, it’s was clear that it was more than that. Over the last few months, she’s turned her love for music and mobile into a real, viable business.

Since April, Rana June Sobhany has done 55 shows on 3 continents. She’s getting paid up to 5-figures per gig, and has played historic venues from the House of Blues in Los Angeles to New York’s Webster Hall. Over 100,000 people have heard her music live, she’s amassed 6,000 Twitter followers, and has been featured on Wired, Huffington Post, and CNN. Her business is taking off. 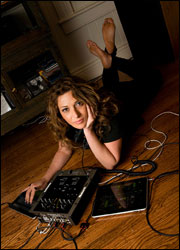 Rana isn’t like your average musician. First off, she’s a former entrepreneur. She co-founded Medialets, a mobile analytics company that has raised $10M from A-List investors. She’s also written a book, Mobilize, which will be published at the end of this year. And while she was trained in music at an early age, this is her first time as a professional musician.

It’s almost like she had the perfect mix of experience. She grew up loving music and has an ear for great beats. Yet, she’s a trained entrepreneur and knows how to leverage her talent into real, hard-earned cash. Funny enough, Rana never really thought of this as a short-term thing. She saw the vision of her evolution into a full-time musician long before anyone else did, writing a business plan and treating the entire thing much like she would treat an early-stage startup.

Furthermore, Rana actually doesn’t like being called an “iPad DJ”. She thinks of herself more as a producer of music. During her performances, she mixes tracks in real-time. To her, the iPad is a new way to interact with sound and she’s doing things nobody could’ve dreamed of doing 2 years ago.

And just like any musician, she’s moving from live performances to recording her own tunes. She’s started to put together a discography and is posting her tracks on SoundCloud. Who knows where it’ll go from here, but it’s great to see the fusion of iPad and music in such an innovative way. What do you think? Judge her music for yourself and then share your thoughts in the comments: