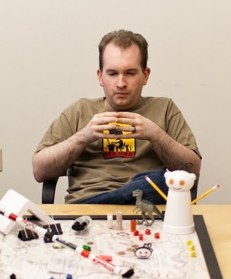 This morning, top Reddit administrator/engineer Chris Slowe announced that he was leaving the social link sharing site to join Hipmunk, the flight search startup that closed a hyper-competitive angel round last month. Slowe joined Reddit back in 2005 as the company’s first employee  — now he’ll be reunited with Reddit founders Steve Huffman and Alexis Ohanian, both of whom are now at Hipmunk.

But why is Slowe leaving now?

Reddit’s traffic has been hitting record highs in the wake of Digg’s failed redesign, so the timing on this seems strange. In a blog post announcing the move, Slowe writes that his “parting with [Reddit parent company] Condé Nast has been nothing but amicable”. But given the issues the companies have had recently this is hard to believe — so I got in touch with Slowe to get a better handle on the situation.

Slowe claims that the differences Reddit had with Condé Nast over the summer have been largely resolved. Until recently, Condé had been very restrictive when it came to allowing Reddit to hire additional developers (the company has been severely understaffed for a long time), but in the coming weeks there will be blog posts announcing additional open positions. “I feel like we’re at the top of the hump,” he says.

Slowe also notes that his job position will be left open for someone else to claim — when Reddit’s original founders left a year ago, existing personnel had to absorb their responsibilities because of a hiring freeze. And, as further evidence of the goodwill between them, Slowe says that even after he leaves he’ll be available to Reddit on a contractual basis.

But despite these positive changes at Reddit, I still don’t buy Slowe’s claims that the companies’ differences have been resolved — I’ve heard multiple times that Reddit still hasn’t gotten the resources it probably deserves from Condé Nast. But I do believe Slowe’s second reason for his departure — he’s ready for another adventure:

I decided to leave mostly because it was time to do something new. Five years in technology is a long time anywhere, and, without suggesting that reddit is a completed project or anything but a continuously moving and evolving target, it was time to move onto something that is less fully formed with room to explore. That, and [Hipmunk founder] Steve Huffman really has been bugging me to join hipmunk for months. ;)

Finally, Slowe talked a bit about the Digg redesign and the impact it’s had on Reddit (and why not everyone over there is throwing high-fives):

Though it’s been a windfall for reddit traffic-wise (having just last month exceeded 10M uniques and 420M impressions for the first time), it really did make me sad to watch the whole thing happen. Intercommunity animosity has been at worst a playful rivalry for years, and we’ve respected one another’s space. Seeing their front page turn from an active, vibrant community forum into a virtual ghost town in such a short time is, frankly, terrifying to watch (being in an analogous space as we are). It reminded us that there is no room to rest on our laurels, and it is the community as much as the content that makes the site.