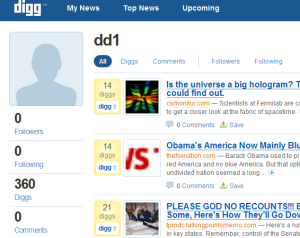 The darkest fears of every Digger (or, as is increasingly common, former Digger) may be coming true: some very compelling data mining by a concerned user has turned up evidence that dummy accounts under Digg auspices have been promoting certain sources to the front page with almost no activity from real users. The information was gleaned from Digg’s own records of front-page stories and associated Diggers.

The 159 dummy accounts, which were given pathetically anonymous names, seem to have contributed systematically to submissions from Digg publishing partners, including TechCrunch. The suspicious activity seems to have started after the algorithm revision of October 15th, after which time a number of submissions (though by no means all front-page stories) were blatantly promoted by these accounts. 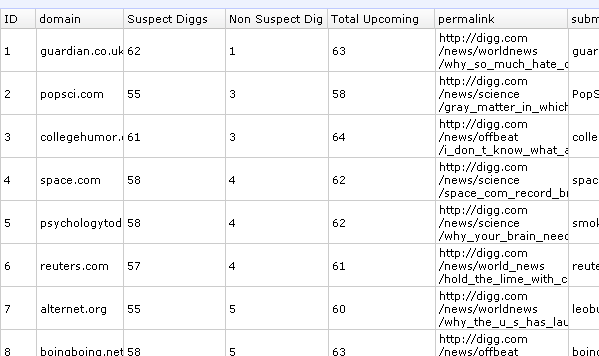 Here’s the kicker; I was skeptical, or at least willing to forgo judgment, until I read this. This activity was monitored by Digg user LtGenPanda, who kept all this information completely private while he parleyed with Digg over a possible response. He emailed them the information at ~5:33PM CST. After receiving no official response (or rather, a stalling response, which was understandable but also understandably frustrating), LtGenPanda let the information go live at a little after 6:30PM CST. The last activity among the dummy accounts? 5:31PM CST.

What does it mean? Well, whether Digg is indeed behind these unbelievably poorly hidden bots, or merely complacent with them (there’s no way they could have missed this in their analytics for over a week), it’s not going to be a good Tuesday. Following hot on the tail of layoffs and the disastrous redesign, this potential scandal could be yet another nail in Digg, or at least in the Digg I knew and loved, before I moved to Reddit. Perhaps there’s a perfectly good explanation for all this, but the evidence really is convincing.

We’ll surely hear more about this before the morning, and will update accordingly. If you are interested in the methods or data used, LtGenPanda’s blog post has all that and more. It’s on Digg now after a notable absence.