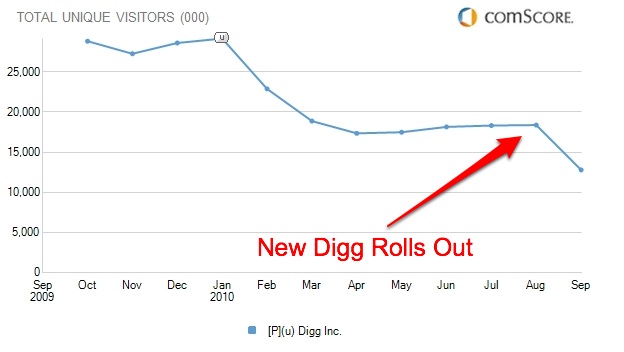 It’s been a difficult couple of months for Digg. The crowdsourced news site pushed out a major new design at the end of August which met with a lot of criticism and broken axles. There was literally a user revolt and things deteriorated so rapidly that earlier this week the company had to let go more than a third of its employees.

How bad did it get? Here’s one data point from comScore: Digg lost 30 percent of its audience in the month of September alone. Digg’s estimated unique visitors worldwide went from 18.4 million in August to 12.8 million in September. That is a drop of 5.6 million people in a single month. Remember, the new site went live for everyone on August 25, so September was the first full month of the new design. Compared to a year before, Digg’s worldwide audience shrank by 16 million visitors.

Other metrics show the same story or worse. Pageviews sank 70 percent from August to September (from 155 million pageviews to 46 million). Average visits and time spent per visitor were also down.

The numbers for October are not yet out, but I’d be surprised to see any immediate rebound. Can Digg stanch its losses and start to rebuild once again?