When you start to think about it, Malcolm Gladwell – author of The Tipping Point and frequent contributor to high-brow magazines – and Chris Dixon – co-founder of Hunch and investor in Skype, Foursquare, Stack Overflow and others – have a fair amount in common.

But there’s one area at least where, if their writing is to be believed, Gladwell and Dixon find themselves at polar odds: the value of Twitter in building relationships and changing the world.

The discord began with an essay, written by Gladwell for the New Yorker, in which he argued that social media is only good for triggering small-scale, fundamentally meaningless change. For significant change – revolution even – Gladwell insists that participants must be bound together by real-world social ties – friendship, loyalty, fear – which simply can’t be synthesized electronically.

Through concrete examples, the essay goes on to demolish the popular myths surrounding various high profile instances of “social media activism” – including the Iranian protests (characterised as grass-roots even though much of the social media chatter was written, in English, from outside Iran), the Moldovan ‘Twitter revolution’ (“a bit of stagecraft cooked up by the government” in a country where “few Twitter accounts exist) and even the case of Sameer Bhatia, whose struggle with acute myelogenous leukemia inspired an online campaign which lead to 25,000 people registering on a bone marrow donor database and a match for Bhatia being found.

In that last case, Gladwell acknowledges the success of the campaign, but counters that it came only because “friends” on Facebook, Twitter and the rest were only asked to do something incredibly quick (signing a register, giving) and with very little personal risk.

Chris Dixon disagrees. Writing on his blog, he admits that ‘I don’t know if Malcolm Gladwell is right when he claims “the revolution will not be tweeted,”’ but “I can say with certainty that the Twitter [Gladwell] describes is not the Twitter I know”. He continues…

“I’ve made more strong ties through Twitter (and blogging) than I have through any communications medium I’ve ever used before. The relationships start off weak – a retweet, @ reply, or blog comment – but often strengthen through further discussions and eventually become new friendships and business relationships.”

Of course, it’s slightly unfair on Dixon to contrast both pieces of writing as if they were equally-matched positions in a debate. Dixon’s response was just a short post on his personal blog, while Gladwell’s 4,400 word New Yorker piece is, to my mind, one of the best things the author’s ever written. And yet, the fact that Gladwell’s piece appeared in print on newsstands across the globe while Dixon’s post was one of many such responses to appear online is actually kind of the point. In writing his rebuttal, Dixon neatly encapsulates two pervasive attitudes amongst bloggers and advocates of social media.

The first of these is the knee-jerk impulse to defend social media against any attack, especially when it comes from someone who, as Dixon says of Gladwell “doesn’t seem to really use Twitter”. In fact, such is his urge to defend Twitter, Dixon doesn’t seem to have noticed that he’s actually agreeing with Gladwell. Consider again what Dixon says: “I’ve made more strong ties through Twitter (and blogging) than I have through any communications medium I’ve ever used before.”

And how do those ties manifest themselves?

“The relationships start off weak – a retweet, @ reply, or blog comment – but often strengthen through further discussions and eventually become new friendships and business relationships.”

Precisely. The retweets, replies and comments started off as inherently weak connections but some of them have since led to actual discussions and friendships and business relationships. No one – certainly not Malcolm Gladwell – is disputing that Twitter is a great way to connect with new people, some of whom might become more than just 140 character bios and 73 x 73 pixel avatars.

Unlike Gladwell, I was – until recently – a heavy user of Twitter. Before I closed my account I’d written a little over 12,000 tweets (more than twice as many as Dixon and Gladwell put together, if that’s really a metric that matters). Like Dixon, I formed plenty of meaningful relationships as a result of all those tweets. Hell, I even started dating a girl after I tweeted about her during a flight (she’s a flight attendant, I was That Creepy Guy On A Plane). But the idea that the resulting relationship was in any sense defined by our use of Twitter is just plain nonsense.

On the contrary, like most of the relationships Dixon is describing, it didn’t become meaningful until we took it away from social media; first to text messaging, then phone calls, then an actual real-world date. The further away from Twitter the relationship got, the more meaningful it was. It’s the real world element that gave it value – something that, in their rush to flag-wave for technology, too many social media fanatics fail to realise.

Which leads to the second, and more dangerous, attitude those same fanatics share: a confusion between Means and End; the idea that saying something is the same as doing something.

Last week, Mike Arrington responded to a Twitter follower who had asked him to retweet this… 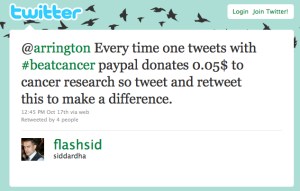 Mike’s response was short, but damning: “@flashsid do you kind of feel like you made a difference by tweeting that ad?”. The tragic truth is that @flashsid’s answer was probably yes.

Just consider some of the most popular examples of cyber-action: joining the save Darfur Facebook group, turning your avatar orange for Burma, changing your location to Tehran in support of Iranian protesters, changing your MySpace background music to La Marseillaise in support of French students (I may have made that last one up) or whatever today’s cyber cause du jour is. Yes, they make us feel good about ourselves, but as for actually making a ha’penny shit of difference; well, let’s turn back to Gladwell…

And therein lies the problem with the myth of social media as a way of spurring people into action, and the automatic urge for many of us who enjoy social media to defend it against all attacks.

Sometimes the attacks are justified.

And sometimes… as in the way that Twitter and Facebook and the rest have deluded even smart people into thinking they’re creating meaningful relationships in 140 characters. And in the way that delusion has tricked millions of well-meaning people into squandering their goodwill on an endless succession of meaningless digital gestures when they could do so much more simply by taking to the streets or writing a check…

…well, sometimes “attacks” like Gladwell’s essay are not only justified, but a vital public service.