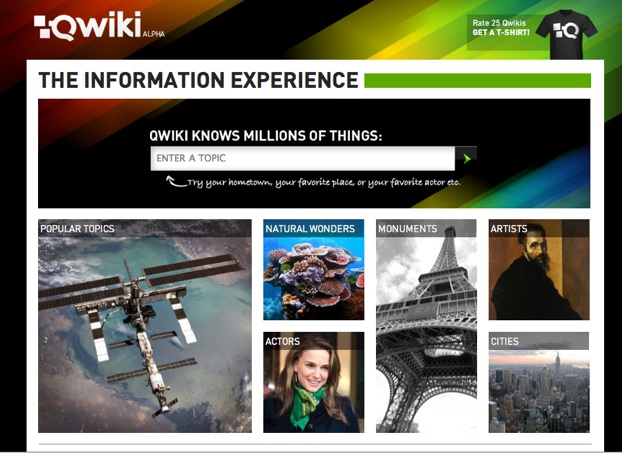 When Qwiki won the top $50,000 prize at TechCrunch Disrupt a few weeks ago, after much celebrating, co-founders Louis Monier and Doug Imbruce promised the service would start to open up privately in October. Today, they are making good on that promise and launching in private alpha, gradually letting in the 50,000 people who have already signed up for access. But if you are reading this post and are one of the first 1,000 people to sign up at this special link, you can get in now and start trying it out.

Qwiki is somewhere in between a visual search engine and a highly interactive and entertaining Wikipedia. It assembles information on the fly for millions of topics, bringing together images and text in a truly magical way. I’ve been playing around with it and learning all about Jellyfish, Kanye West, black holes, Thomas Keller’s Per Se restaurant, Google exec Marissa Mayer (who was one of the finalist judges), great white sharks,, and even my hometown.

The service scours many information sites on the Web, mostly Wikipedia, but also LinkedIn, Google Maps, Fotopedia, and CrunchBase, and creates a Qwiki that you can watch about that topic. A Qwiki looks like a narrated video, with matching images popping up as a female speech-to-text voice tells you about the topic you’ve chosen. All of this is done algorithmically. It is not reading any one given entry in Wikipedia or anywhere else, but rather summarizing that information first and then presenting it in a brief and very visual way. This would be awesome on an iPad, which they are also working on.

After each Qwiki is completed, you are presented with a selection of related Qwikis so that you can keep on exploring. Of course, there is also the search box. Currently, there are Qwikis for about 3 million topics and growing. This is still a private alpha though, and if you do sign up, you will be asked to provide feedback after each Qwiki so they can improve them before opening up the service to the public in a few months. Below is Qwiki’s demo again from the final round at Disrupt: 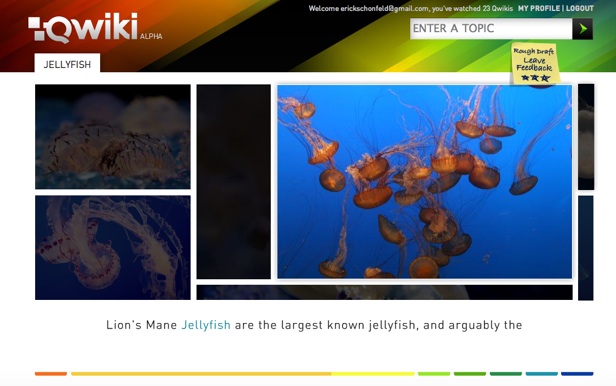