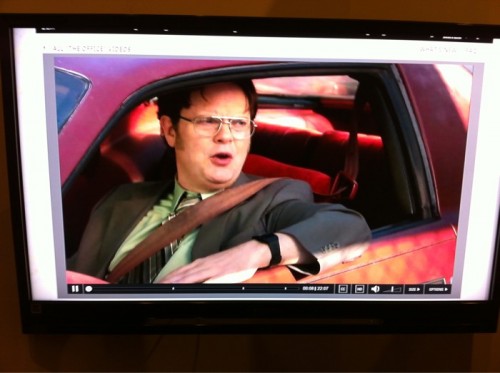 The title of this post is both a very old idea and a very new one. With the prevalence of fiber connectivity and pervasive broadband speeds, this year has been a hot one for bringing together the home computer and the living room TV. While companies like Apple and Google battle over share of TV viewers, they have left open and promoted the web for content distributors to control their own experience through HTML (and, especially, HTML5).

To that end, it looks like Apple has one-upped Google by opting to privately pre-arrange distribution deals with traditional studio networks beginning with ABC and FOX, while Google has no deals in place at all, hoping the networks will just “allow” consumers to watch Web videos on their TVs. But Google TV is getting a slap in the face from several networks who pulled the plug, right on the big release day. Just as reviews were rolling out in favor of Google’s new living room effort, ABC, CBS and NBC are exiting stage left.

The interesting thing here is that the networks are not sending Google cease and desist letters, they are just simply blocking this particular device from accessing their otherwise free websites, using a free and open protocol. If you normally like to visit http://abc.com on your computer to watch video content, no problem, but if you want to access the website on your Google TV browser by going to abc.com, currently, you will be blocked.

These tactics by the networks are part of a clear strategy that has been at play for some time, Google could have anticipated this would happen. Remember the Hulu vs. Boxee battle? Boxee pumped Hulu through to the TV, but Hulu blocked Boxee because Hulu is restricting their content to computer screens. So Boxee worked around it to get Hulu to the TV screen. Then Hulu blocked the workaround, so on and so forth. Boxee was confident that they were within the boundaries of the law because they were picking up on signals that Hulu was sending out with a free and open protocol, via the world wide web.

Now the same networks behind Hulu are sending the same message to Google in exactly the same way. They are saying you can watch their content with a browser on your computer, or phone, but when it comes to the Google TV set in particular, just like the Boxee, or any other living room TV set, it’s a no go. They are discriminating by device.

Here is what is going on. If you have a TV now, you are almost certainly paying for TV content with a monthly cable bill and if you start to get your TV content through the web, it will be just a matter of time before you will cut your cable bill. The cable companies know this and they appear to be doing everything they can to force the networks to comply with their demands to block their streaming Web video from appearing on TVs. The networks have their hands tied because almost all of their revenue comes from cable right now and if they break up with cable, and go hard-core internet on their own, they will likely implode overnight. For, as you know, Google TV is not offering them anything, and Apple isn’t offering a good enough deal to exist on. So there you have the problems of the traditional TV networks, once rivals now conspiring to sustain their long held control of a medium that is slipping away.

As for the rest of the world, you can’t stop us. Developers of Web video distribution platforms forge ahead. Apple is offering to lure them in with partnerships, Google is giving them the opportunity to figure it out for free. Neither Apple nor Google, nor anyone else is waiting any longer. The time is now. You can feel it. The rest of the video world marches on, bringing the internet and the TV closer together.

We are working hard to open source the code for the GoogleTV project, and hope to release the source code next year.

If you can’t add or play a movie in iTunes or QuickTime Player, then you won’t be able to convert it to play on Apple TV.

When Steve Jobs says, “Open doesn’t always win,” he’s talking directly to Google about this war. But for those in the TV business who wish to distribute their content to both Apple TV and Google TV audiences, it doesn’t really matter.

In the past, with this same closed strategy, Apple may have captured the content of the music industry business but I suspect Apple doesn’t really care about the TV content business too much. The studios are traditionally full of wacky businesses and the pool of valuable TV content is a relatively small one with a profit margin that is expected to shrink. How many hit series are there at any one time anyway? Not that many. And of all the series in the past how many are still in high demand?

No Need For Apps

The world is obsessed with apps right now. An app is just software for your computer, and developers are being forced to recreate the same experience dozens of different ways. It’s a constant re-inventing of the wheel. What a waste of time. Now Microsoft is getting into the game too. While it’s easy for a consumer to ignore by just sticking to their platform of choice, developers and content distributors need to figure out WTF they must do next to make their “app” look the same on Windows or some other new platform, like yep, Apple Lion.

Yes, the diversity in platforms is also needed and welcome. It’s in the best interest of the world overall to have many choices. There are many examples of wants-and-needs not being met by just one development platform. Special tasks require alternate solutions. But for TV content, distributed to the living room, none of this really matters because the place to be is not necessarily on the phone, and its not in an app store, its on the web, via HTML.

HTML5, the new web standard that has been adopted by Apple, Google and many others, lets web developers create advanced graphics, typography, animations and transitions without relying on third party browser plug-ins (like Flash). HTML5 is completely open.

Your GoogleTV site can look great with the right mix of video, audio, and visual effects. HTML5 provides this kind of rich content and more, and it’s supported in GoogleTV’s Chrome browser. For ideas, tutorials, and guidance, check out HTML5 Rocks.

You have to ask yourself, if you are looking for scale, what is the lowest common denominator here?

For TV on the web, it pretty much comes down to H.264 video in HTML5. The future of TV is not your mom’s app, it’s the browser. Unless of course the magnets keep us pinned to the vortex due to the effects of a fragmented market. Right now, all of us are unable to discover what we want, forcing Web video developers (and all others too) to tweak their apps for a hundred different versions of Android, on hundreds of different hardware platforms, plus all the iPhone, iPad, and Mac versions, plus Windows, plus this, and plus that, oh my. Jobs was right, what a mess.

Unless you develop for HTML5 with H.264.

For a publisher, the idea of charging for apps can certainly lead to a nice revenue stream. But giving away 30-50% of your revenue stream to someone for selling the app is not all that nice. In the long run, I’d rather have you come to my website, and I can just sell it to you there. If Apple has a store, and Android has a bunch of stores, and Nokia has one, and Sony and Windows, and everyone else under the sun has one, your business can have one too, no big deal.

The challenge then shifts from app building and revenue-share issues to discovery of your website. Yet the problem isn’t a new one, it’s a problem you face with apps anyway. As a distributor of TV content, if you want to get your content to the living room TVs, especially the ones on the market right now like the new Sony-Google TV or a nice new Apple TV, and you want to bypass the bureaucracy of others’ stores, and setup costs, and revenue shares, even as you want it to work great for the Apple TV experience and for the Google TV experience, and for any other living room TV integration—Boxee, Roku, you name it—format your website to detect the device and present the right display from your website. It’s that simple. Control the entire situation.

And even though you know you are going to develop apps for various TV platforms and other platforms anyway, especially because it’s a great way to get front and center, make them free and use them as a simple browser to get the apps built quickly and inexpensively. Consider developing for the web first so everyone can gain access and you can remain in control. There is a frenzy of “mobile first, web second” development philosophy in fashion right now, and rightfully so, but the living room TV isn’t mobile. It’s stationary. So when creating your apps, you can keep it simple and just point them to your own website where you can manage your own community, special features, distribution, promotion, advertising and sponsorship through a unique, centralized, cross platform environment called the web.

The beauty of HTML TV is that it’s a fancy protocol which everyone loves, it’s open, and it’s free.