No, it’s not what you’re thinking — Google Ventures didn’t just invest in a Groupon clone. But the search giant’s VC arm is taking a stake in a local deals startup called Signpost, which looks to help you find the best deals in your neighborhood (more on that in a moment). The size of the Google Ventures investment isn’t being disclosed, but it’s a follow-on to a $1 million seed round Signpost raised earlier this year from Spark Capital. Signpost has been known as Postabon up until now — in conjunction with the announcement, the startup is getting a new name and is relaunching with support for more cities.

At a high level Signpost is pretty straightforward: log onto the site, and you’ll find a listing of deals at restaurants, retailers, and other merchants located in your city (you can zoom in if you want to restrict your search to within a few-blocks). And unlike sites like Groupon, there are dozens or even hundreds of deals visible on Signpost at once, ranging from happy hour at your local bar to a 40% discount at a nearby spa this weekend.

The site’s biggest difference from Groupon, though, is the source of its deals: instead of having a salesforce reaching out to merchants, most deals are submitted by other users. That means if you notice that your local coffee shop is offering a two-for-one special on drinks, you can log onto Signpost and tell your friends. At this point there isn’t much incentive to do this — you can earn karma points but can’t exchange them for anything — but it sounds like Signpost has plans to encourage posting more deals down the line. And CEO Stuart Wall says that Signpost is already getting plenty of submissions even without having much of a reward mechanic.

Wall says that in cities like New York and San Francisco, there are many thousands of deals and discounts being offered at local businesses on a daily basis — there just hasn’t been a good way to sift through them. To help users filter through the noise on Signpost, users can vote on each deal to determine if it’s any good (you can also verify that a given deal exists, to weed out any possible spam). And while the site isn’t directly targeting merchants yet, local businesses are free to post their own deals themselves, though there’s no guarantee they will be voted up.

Signpost originally launched in December 2009, when the site was still known as Postabon. Since then it’s been available exclusively in Manhattan, where 12,000 active deals are currently posted. And starting today, the site is supporting deals in San Francisco, Boston, and Chicago as well.

So will Signpost succeed? It won’t be directly competing with Groupon, Living Social, and the hundreds of other daily deal clones, but it certainly won’t be the only site offering this bulletin-board style collection of deals (8coupons is one site that’s doing something like this, though it’s looking pretty noisy these days). Signpost has a few hurdles to clear: it needs to get users coming to the site to browse for deals; it has to get people to routinely upload interesting new deals; and it has to fend off possible competition — there isn’t much of a network effect or any kind of user lock-in at this point, which could lead to trouble if clones start to pop up.

That said, the site hasn’t yet shared its monetization plans, so it may have something up its sleeve that drew the interest of the Google Ventures team. Signpost wouldn’t say if anyone from the Google team is joining their board, but Google Ventures partner Wesley Chan appears to be leading the deal — prior to joining Ventures, he was responsible for Google acquiring the companies that became Google Analytics and, later, Google Voice. 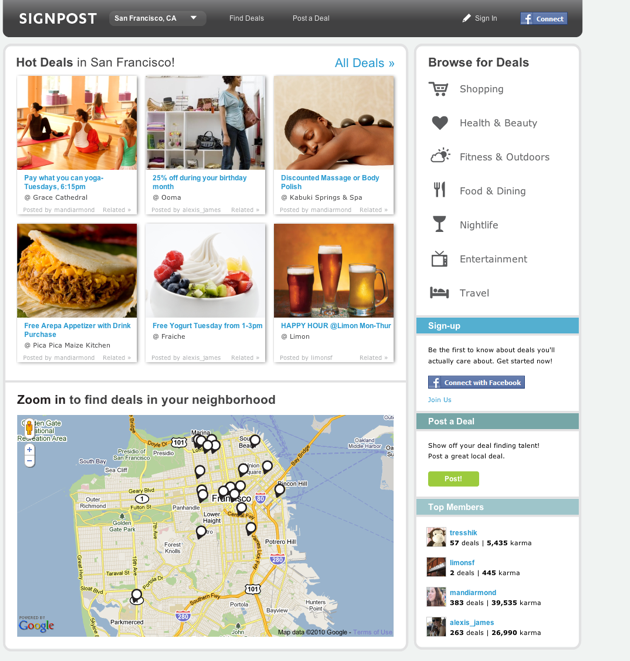