Since I’ve blocked out communications from Fast Company ever since their linkbait Influence Project started in July, I didn’t see this below email sent to all “participants” of the project signaling its close (thanks Danny Sullivan!).

The Influence Project’s basic goal was to get people click on Fast Company links — the more links you personally got people to click on, the bigger your “influence.”

Blogger Jeremy Schoemaker heroically got enough people to do it, beating out Internet biggies like Mark Zuckerberg, Steve Jobs, video blogger iJustine and even our own Michael Arrington in online influence according to the Fast Company rules.

iJustine did get her place in the Fast Company sun however, in a sprawling six page photo piece called “The New Faces of Social Media,” which actually included none of the top Influence Project influencers. (A much shorter article about those guys here).

Search Engine Land’s Danny Sullivan points out the discrepancy between the two sets.

Online influencers according to The Influence Project

Truth be told, it’s taken tl:dr.it about 20 minutes to summarize “The New Faces Of Social Media” so I haven’t actually read it, but the very fact that it’s paginated probably means that there’s nothing in it you as TechCrunch readers don’t already know.

Key takeaway: Instead of an article of any substance or a spot on the cover, non- web celebrity participants in the project got the following email …

I want to personally thank you for participating in our online experiment, The Influence Project, last summer. More than 30,000 people signed up, and more than 1.5 million individuals came to the site to show their support.

We promised to highlight all participants who submitted photos in the November issue of the magazine; that issue is now rolling out on newsstands across the country. (The cover image is of Lance Armstrong.) You can also view the final results of The Influence Project–and zoom in on specific photographs–at www.fastcompany.com/influence.

I hope you found The Influence Project a worthwhile experience.

Well, no Bob, as a participant, I most certainly did not find The Influence Project a worthwhile experience, not in the slightest. First of all you all but ignored the guy who actually won and picked your own winners, presumably because a vignette of iJustine will drive more traffic to your website than a profile of the unknown outside of the tech industry Jeremy Schoemaker.

And then, to add insult to injury, and despite your previous promises of this thing actually having some real world impact (a.k.a influence), you end up putting cyclist Lance Armstrong on the cover of what was vaguely designated as your Fast Company Influence Project issue because what? Oh, that’s right, while they may generate traffic, online influencers (even your self-designated “New Faces Of Social Media”) don’t necessarily sell hard copy magazines. 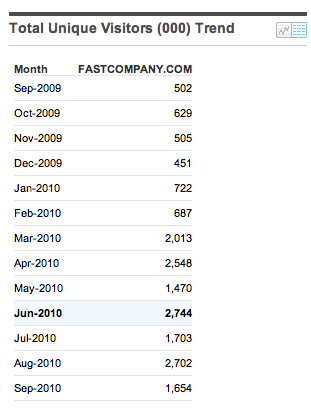