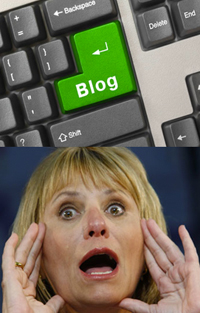 Carol Bartz was almost subdued on today’s earnings call. Missing were the salty outbursts of previous conference calls, but she did manage one zinger. Apparently, one of Yahoo’s problems before was an inflexible content management system which couldn’t deal with rolling out new features quickly or interactivity. According to Bartz, “to do a blogging event was an extremely hard engineering feat.”

Well, now after spending a lot of time and money creating a new content management system (Yahoo News is now on it as of yesterday), Bartz says Yahoo is ready to dive headfirst into the online media business. Instead of a technology stack, she talks about a “content stack,” with original Yahoo editorial on top, followed by licensed news and articles from other sources, “pro blogging,” and then crowdsourced news and information at the bottom (presumably, that will come from her Associated Content acquisition).

As an example of how Yahoo can help turbocharge these different forms of content, Bartz shared some pretty impressive numbers for the Upshot news blog Yahoo launched on Yahoo News during the summer. In six months time, the blog is now doing 80 million pageviews a month and minutes spent on the blog shot up from 7 million to 270 million minutes. She also mentioned that Yahoo video streams are up 92 percent on an annual basis.

With the new code, adding things like blogging, comments, video and other interactive media is now easier and doesn’t require amazing feats of engineering. Welcome to wonderful world of blogging, Carol.