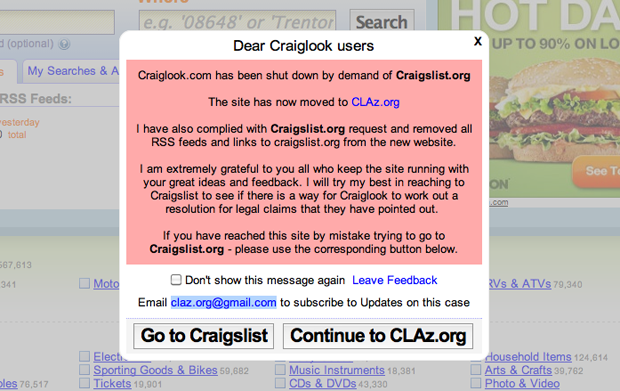 Apparently used by some (it looks like primarily vehicle enthusiasts mostly) more than Craigslist.com itself, aggregator and search engine Craiglook was shut down by Craigslist this week for violation of its Terms of Use and trademark violations regarding the Craiglook domain name, in a move reminiscent of when the company blocked Oodle back in 2005.

A visit to Craiglook reveals the following pop up disclaimer:

Craiglook.com has been shut down by demand of Craigslist.org

The site has now moved to CLAz.org

I have also complied with Craigslist.org request and removed all RSS feeds and links to craigslist.org from the new website.

I am extremely grateful to you all who keep the site running with your great ideas and feedback. I will try my best in reaching to Craigslist to see if there is a way for Craiglook to work out a resolution for legal claims that they have pointed out.

It’s hard to think of the decidedly Web 1.0 Craigslist as Goliath in any David and Goliath story, especially since it has its fair share of companies wishing it hadn’t encroached on their territory (media companies mostly) and especially because it doesn’t provide the Craiglook search functionality itself.

I have contacted both Craiglist and Craiglook for more information and will update this post when they respond.