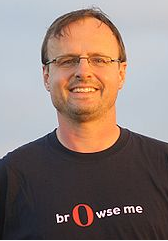 Lots of abbreviations in the title and URL, but with an audience like TechCrunch’s I’m not too worried about the point coming across or not. At this week’s Opera press event held in Oslo, Norway, I had a chance to spend a couple of minutes talking to Håkon Wium Lie, who is not only the software company’s chief technology officer but also broadly known as the “father of CSS”.

In 1994 while at W3C, Wium Lie was the man who proposed the concept of Cascading Style Sheets, which describes how documents are presented on screens, in print, or perhaps how they are pronounced. A graduate of the MIT Media Lab, he also spent quite some time at CERN working on the World Wide Web project together with Tim Berners-Lee and Robert Cailliau (see our earlier interview with the latter here).