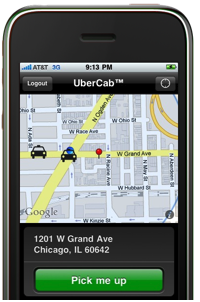 UberCab, an app that lets users request a car service to pick them up wherever they are right now, has closed a $1.25 million angel financing round. First Round Capital led the deal, and partner Rob Hayes joins UberCab’s board of directors. Lowercase Capital and Founder Collective also participated, as did more than a dozen other individual angel investors.

The company was founded by Garrett Camp (StumbleUpon founder) and Travis Kalanick in 2009. The goal was to simply scratch an itch – Garret wanted a private car and driver without actually keeping one full time. But calling a car service multiple times a day was a hassle.

So he came up with the idea of UberCab, and talked Kalanik into joining the effort. The two then brought in Ryan Graves to actually run the company. When it launched earlier this year anyone in San Francisco could download the app to their iPhone or iPad and use it to call up a car at any time. Within a couple of minutes a Towncar, Escalade or other car will show up wherever you are, using your mobile device’s location. You take the care wherever and are automatically billed on your credit card, including tip. The best part of the service, in my opinion, is that both the driver and passenger get to rate each other at the end of the trip.

I’m a user of the service and have become fascinated with the idea of anyone eventually being able to join the service as a driver, much as AirBnB has let anyone rent out rooms in their home. I also like that it’s easier to use than taxis, have much nicer cars, and costs only about 20% more.

The service will soon launch in other cities. But for now it’s just San Francisco.