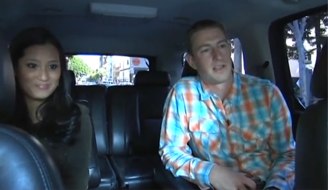 Less than four months old, UberCab’s mobile app for on-demand car service has become something of a breakout hit in San Francisco this summer.

The startup has amassed a fleet of 45 SF drivers to cater to the whims of the early adopter urbanites and, so far, it’s delivered on its promise to provide swift service with the average wait time hovering between 7 to 8 minutes. To certify UberCab’s buzz factor, a group of prominent investors led by First Round Capital have plunked down a cool $1.25 million for a piece of the company’s seed round.

On Friday, we caught up with UberCab’s chief executive, Ryan Graves, to take UberCab for a spin.

Our mission was to get a ride from UberCab’s headquarters on 540 Washington St.  to TechCrunch HQ at 410 Townsend. After standing by for less than the average UberCab wait time, a black SUV and a friendly bespectacled driver named Jesse pulled up. While I wondered whether we were benefiting from special treatment— the request was dispatched from the CEO’s mobile after all—  it was a pleasant and indulgent ride back to the office. The total bill including tip was $36, that was a little more than double our initial ride from TCHQ to UberCab (although traffic was heavier during the Uber run).

For the wait time and the convenience of knowing exactly when you’re getting picked up, UberCab is definitely a welcome alternative in SF’s not-so-reliable car service market. The question is whether the rest of America’s major metropolitan areas will embrace the startup with such open arms— before other copycats get there. The team is eager to break into New York, Los Angeles and Las Vegas but is wading through regulation and market-specific issues. The hope is to be there before the end of next year.

At UberCab’s headquarters (which is literally a glass conference room with five employees), we asked the new CEO about his plans to roll out, the effect the startup will have on the private car service market, and how the team came together (see video above). Interesting factoid: Graves came on board after noticing a tweet from founder Travis Kalanick, who was looking for people with business development experience.  Graves simply responded with his e-mail address and the rest is Uber Cab history.

For those with Androids (and too lazy to SMS) UberCab will start beta testing an Android app this weekend with plans to roll it out in one or two weeks.