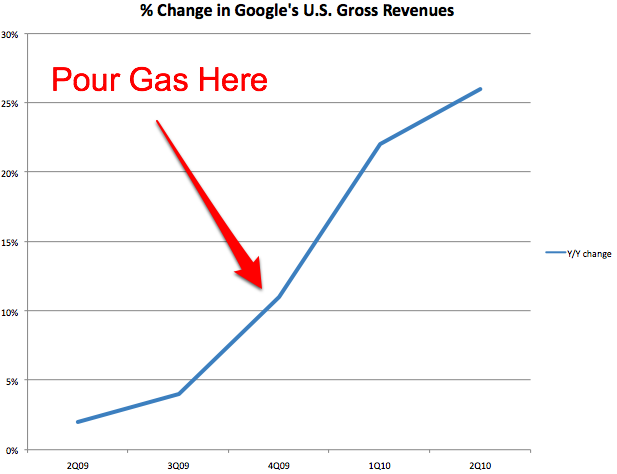 Google tried yesterday to convince the world that it is no longer a one-trick pony (or won’t be forever). It revealed for the first time during its earnings call some pretty big revenue numbers in businesses other than core search advertising. It’s annualized revenue for display advertising (including YouTube and DoubleClick) is now running at $2.5 billion; mobile search is $1 billion (oops, that’s still mostly search). Some people don’t buy it. But as Google CEO Eric Schmidt told an audience today at MIT: “Anything that is $1 billion is good.”

The real story from yesterday’s blow-out quarter is not so much that Google has learned any new tricks, but rather that the one it knows is still a pretty good trick. And Google is playing that trick for all it’s worth. Towards the end of the earnings conference call, CFO Patrick Pichette offered this garbled metaphor: “When you see a hockey stick, pour on gas on that fire.”

In a note today titled “Fuel on The Hockey Stick,” Citi analyst Mark Mahaney included a table showing the growth in U.S. gross revenues, which I’ve charted above. Google’s U.S. gross revenues grew 26 percent in the third quarter, compared to growth of 22 percent, 11 percent, 4 percent, and 2 percent in the four previous quarters, respectively. New search ad formats such as comparison ads and product listings are showing 10 to 30 percent better clickthrough rates than plain-vanilla paid search ads, and are helping revenues.

Display ads and mobile may not yet count as another trick, but by next year they could start to be material. Google offered up the numbers more to signal what is coming and to help analysts with their “Jedi Guesstimation skills,” in the words of senior VP of product management Jonathan Rosenberg. Since Google doesn’t give official guidance on future results, these snippets of information are all they have to go on other than the official quarterly results. Mahaney now estimates that 10 percent of Google’s revenues next year will come from display, YouTube, and mobile.

Today, Schmidt also offered up this additional piece of advice: “A simple rule for those of you who are CEOs: rising revenues solves all problems.” In the end, it really doesn’t matter to investors where the revenues and profits come from, as long as they keep going up. Maybe if they keep pouring gas on that hockey stick, it will turn into another pony.

Photo of actual pony on Google campus, circa 2007, courtesy of Kevin Marks: 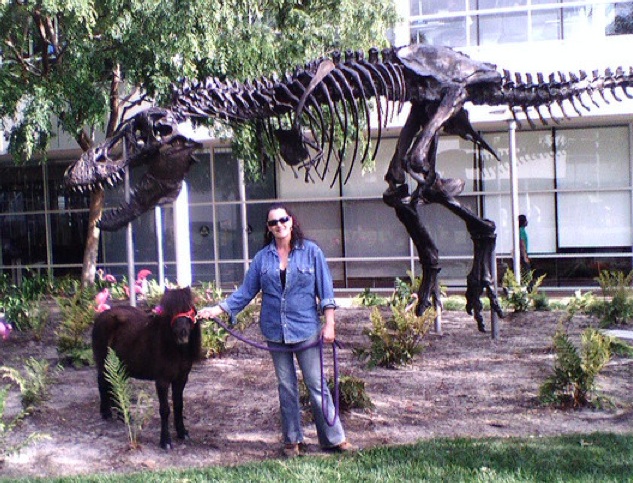