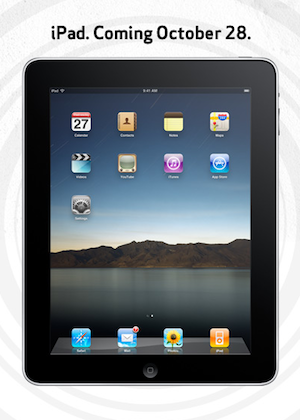 This morning, Apple issued a press release where the first word in the title was one many of us have been waiting years for: Verizon. No, they didn’t announce a version of the iPhone for Verizon’s network. But what they did announce—an iPad/Verizon MiFi bundle—is a very good sign for that next partnership.

That may sound obvious enough, but not everyone is buying the significance of the maneuver. It is true that Apple did not make a CDMA version of the iPad, and this device plus additional third-party dongle is sort of a weird offering coming from Apple. But the fact that Apple and Verizon are clearly working very closely on this deal is significant. Let’s consider what the two sides are actually selling here.

Apple is agreeing to sell all three varieties (storage sizes) of their iPad in Verizon’s stores across America starting in two weeks. When purchased with their MiFi device, the two together cost $629.99, $729.99, and $829.99 for the 16 GB, 32 GB, and 64 GB variations, respectively. Yes, those are the exact same prices that Apple is selling the iPad with built-in 3G from AT&T for. But again, the MiFi is a stand-alone product, so Apple/Verizon are selling you the WiFi-only version of the iPad to use in conjunction with this device.

Normally, this MiFi device costs $269.99 for the full retail price, but considering Apple sells the 16 GB WiFi-only iPad for $499.99, customers are clearly getting a steep discount on this bundle. Who is eating that cost? It’s hard to know for sure, but my guess would be Verizon since they’re gaining new or additional data users (customers) with the iPad deal. Let’s say Verizon is the one eating the fully discounted cost. That means they’re selling their $270 MiFi for only $130 — a nice $140 discount.

Yes, Verizon will give you a MiFi device for either $100 (or for free online), but that’s with a 2-year contract commitment. The iPad+MiFi deal requires no contract commitment on the user’s end, and there’s still this huge discount being offered. Again, that speaks very well to the prospects of a continued Apple/Verizon relationship going forward—especially if it was actually Verizon that was willing to give something back.

But even more fascinating and perhaps telling is that Verizon is also allowing customers to buy the iPad in their stores without having to buy a MiFi device with it. In that case, the iPads are being sold at the regular retail prices ($499.99, etc). That suggests that if nothing else, Verizon wants to use Apple’s device to get people in their stores. And the fact that Apple is letting Verizon “use” them in this way says something (hint: future partnerships). And again, it seems to suggest that Verizon is the one eating the cost of the MiFi device if customers opt to buy one.

And let’s look at the data plans Verizon is offering for these MiFis sold with iPads. For 1 GB of coverage a month, it’s $20. For 3 GB, it’s $35. And for 5 GB, it’s $50. Each of these are similar (or better) to the already good deals that AT&T offers for their iPad plans. AT&T’s cheap plan is $14.99, but that’s for only 250 MB of data a month. They also have a $25 a month plan for 2 GB. When Apple initially unveiled the iPad, CEO Steve Jobs touted how remarkable these plans were (of course, at the time there was an unlimited data plan for $29.99, which AT&T quickly killed). Now just a few months later, he has been able to talk the nation’s largest carrier into the same type of deal.

I still want to remain skeptical and not get my hopes up, but it looks as if Apple and Verizon are kicking off the beginning of what could be a nice little partnership here. This sort of thrown-together component is step one. You could easily see the CDMA iPhone 4 in January being step 2. Then step three might be a CDMA+GSM iPad (and/or iPhone) sometime later in 2011 that works on both Verizon and AT&T—no MiFi required.