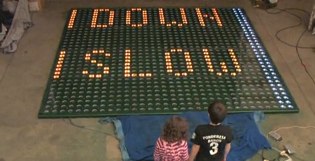 It looks like the future may be paved with solar panels after all.

In early August, we told you about an out-of-the-box green tech company, named Solar Roadways, that had the audacious plan to replace America’s asphalt roads with textured, glass solar panels that could collect energy, distribute it and simultaneously serve up LED-powered signs (see video below). According to Solar Roadways’ founder Scott Brusaw, the idea is to install a massive solar panel network laid out end-to-end from California to New York that would dramatically change the energy landscape and the country’s literal landscape.

At least that was my first impression— I wondered how the United States with its shoddy infrastructure (asphalt upkeep is hard enough) and burgeoning deficit could pay the $4.4 million per mile of road (per Bursaw’s calculations) to fulfill Brusaw’s vision. But I guess I was wrong. The collective web spoke and of the 3,500-plus applicants in GE’s Ecomagination Challenge, Solar Roadways won the first Challenge Award and $50,000— the equivalent of 5, 12’x 12′ panels.

Akin to the audience choice award, this Challenge prize was based on the community’s vote— roughly  74,000 submissions.

For those unfamiliar with the GE Ecomagination Challenge, it’s a partnership between GE and venture capital firms, Emerald Technology Ventures, Foundation Capital, KPCB and RockPort Capital, to invest $200 million in green tech technologies and startups. The core of the contest is five Innovation Awards, worth $100,000 each, which will be announced in early November. GE may also offer commercial relationships to the applicants.

Still far from the Innovation Award or a lucrative contract with GE, Solar Roadways hasn’t won the homecoming crown just yet. However, Bursaw told us on Thursday that the buzz around the Ecomagination challenge and their recent win has brought new eyeballs (about a 5x increase) to the website and the startup’s Facebook and Myspace pages. The win also doesn’t hurt the company’s chances in securing future funding. On top of the $50,000, Solar Roadways has already secured $100,000 from the Federal Highway Administration and is currently applying for a $750,000 FHWA contract.

Nine hundred thousand will not get Bursaw anywhere near his end goal— and Bursaw acknowledges that his dream would take several decades to complete, if it’s even possible— but he says there are smaller, pragmatic ways to deploy Roadways’ technology. For instance, the company has talked to national retailers like Wal-Mart about putting their panels in parking lots and powering the adjacent store/restaurant with solar energy. Of course, there are about 1,000 steps to go before Bursaw even gets there, like designing the glass structure and texture, improving traction, testing durability, manufacturing the panels on a large scale, etc.

So for now, I’ll believe it when I drive on it.

For full disclosure, GE is a sponsor of TechCrunch’s GreenTech section.