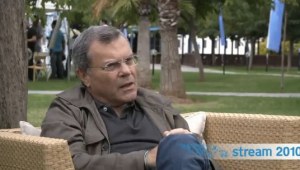 Sir Martin Sorrell, the New York City based co-founder and long-serving CEO of WPP, a global communications company that employs over 140,000 people in 121 countries, is arguably the world’s most powerful advertising executive. Unlike many other CEOs of global enterprises, however, Sir Martin is sensitive and, in some ways, sympathetic to the disruption of the digital revolution. Not only does WPP have an increasingly powerful digital division, but Sorrell also hosts an annual unconference in Athens, Greece entitled Stream in which he invites 400 business and creative people from around the world to discuss the future of technology and communications.

Not only was I lucky enough to be invited to Stream earlier this month, but I also had the good fortune to interview Sir Martin on stage in Athens where he was disarmingly frank about the technological challenges facing WPP in the 21st century. While that conversation was off-the-record, I did manage to catch Sir Martin afterwards for a Techcrunch interview in which he spoke to me not only about the Internet and the future of advertising, but also about why free doesn’t work, how physical books and newspapers are history, and why the Chinese economic model is a “miracle.”

Sorrell: On Why Free Doesn’t Work


Sorrell: On The Future of Advertising


Sorrell: On Why China Works


Sorrell: On What Kind of Internet He Wants