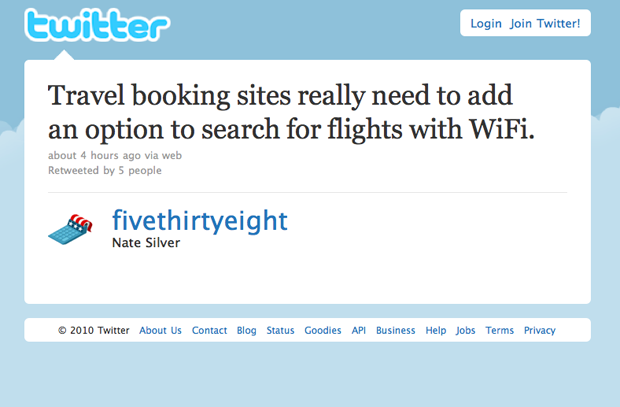 We’ve all been there and I was just there, by there I mean making the grave mistake of booking a flight without Wifi. As a person who works primarily online, I pretty much feel entitled to doing my job from anywhere now that Gogo Inflight Internet allows me to blog from the skies. In fact, I now assume that all flights will have Wifi, so when they don’t (eh, hem United Flight 0059) it’s like someone cut off your oxygen. And it’s such a rude awakening when you get off the plane and realize that there’s a thousand emergencies that went down while you were watching the inflight Adam Sandler movie and you have to scramble for the rest of the day fighting fires.

My point? HasWifi can nip this problem in the bud, by allowing you to check on whether your flights will have sweet, sweet Wifi before you buy them. Says founder Anthony Petito on his motivation behind building it:

“Several months ago, I had a slew of flights that took me across the country.  Since they were all booked back-to-back, it left little time between trips where I could actually hop on an Internet connection to get work done.

My solution was to use the wifi on the plane instead.  The problem was that I had no idea if the flights I booked would even have the option available to me.  After hours of searching the web, the airline carrier’s website and even GoGo’s own website I still had absolutely no idea.”

Petito decided to build something that solved his problem fast and he came up with HasWifi. And while there is a social voting feature and you can also search for Wifi flights through Tripit, HasWifi’s search features are currently limited. Currently only serving six, Petito plans on expanding to offer more carriers both in the US and abroad.

The company is also building an API to allow ticketing sites like Expedia to use HasWifi data, which would eliminate the need to visit the HasWifi.com site while purchasing flights. As far as eliminating the need to visit HasWifi all together, well that’s up to the airline carriers. 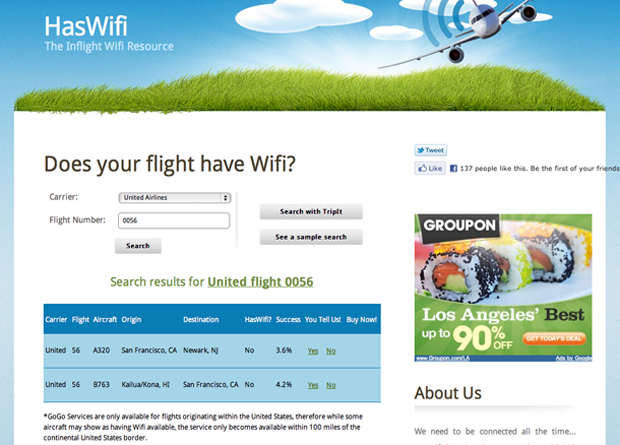