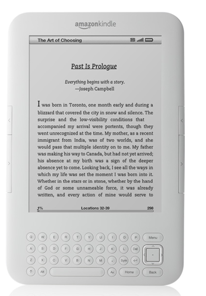 It looks like Amazon is extending its e-reading platform to include short works and digital pamphlets. Today, Amazon is launching Kindle Singles, which are Kindle books that are in the company’s words, “twice the length of a New Yorker feature or as much as a few chapters of a typical book.” Generally, Amazon characterized Kindle Singles as 10,000 to 30,000 words (roughly 30 to 90 pages).

Amazon says that Kindle Singles will have their own section in the Kindle Store, which currently has over 700,000 books, and will be priced much less than a typical book (although Amazon didn’t reveal a range of pricing for the new format). Like standard e-books on the platform, Kindle Singles can be read on the Kindle, Kindle 3G, Kindle DX, iPad, iPod touch, iPhone, Mac, PC, BlackBerry, and Android-based devices.

It sounds like anyone can submit a story or piece to be included as a Kindle Single, and Amazon is using the announcement as a “call to serious writers, thinkers, scientists, business leaders, historians, politicians and publishers” to submit writings. As Amazon writes in the release: Singles are a “perfect, natural length to lay out a single killer idea, well researched, well argued and well illustrated—whether it’s a business lesson, a political point of view, a scientific argument, or a beautifully crafted essay on a current event.”

This new format is is important because Kindle Singles opens up a market for new authors. Singles gives bloggers and writers out there who don’t have time to write a book the opportunity to publish a pamphlet or shorter work. And it seems fairly easy for writer to publish these works. Amazon will work directly with publishers and writers to publish Kindle Singles. Amazon says that “Any rights holder can use the already popular Kindle Digital Text Platform (DTP) to self-publish work in the Kindle Store, and this include Kindle Singles.”

A few weeks ago, Amazon released “Kindle for the Web”, which enables people to read and share digital book samples in their browsers without the need to install or download anything.